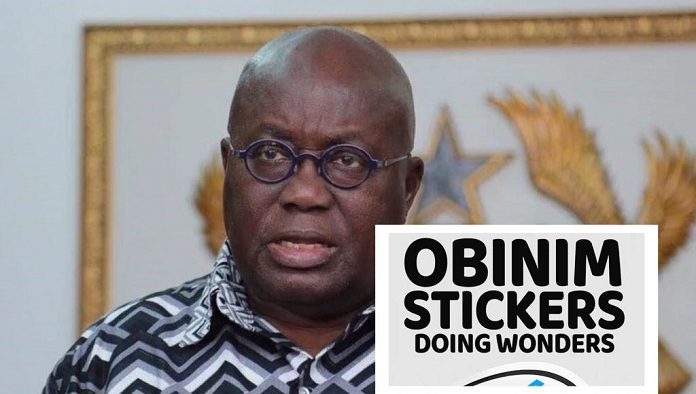 One of the most trending issues on social media in Ghana is Obinim Stickers. Bishop Daniel Obinim is the founder and leader of God’s Way Church.

It all started when Ghanaians church members of Obinim started giving weird and wild testimonies of what Obinim stickers have done for them.

Since then, Ghanaians launched Obinim Stickers Challenge where people give weird testimonies of what the Obinim stickers have done for them since they tried it.

READ SOME WEIRD TESTIMONIES FROM SOCIAL MEDIA BELOW

The president of Ghana, Nana Addo Dankwah Akufo-Addo addressed the nation yesterday and outlined the reasons why the Ghana-America deal is not a sale of Ghana’s sovereignty in any way. He denied the rumors that Ghana has offered a military base to the American Military.

After the address, social media users listed 6 major reasons why the president as a matter urgency should get the Obinim stickers.

It was mainly on the back of unemployment that NPP rode to power. Millions of Ghanaian youth were promised jobs. Graduate unemployment is ridiculously high. Yet the Nana Addo led NPP has not done anything about it.

Other social media users who are championing the ‘ObinimStickerChallenge’ have the believe that, the easiest and the fastest way Nana Addo to full the campaign promise, “One District-One Factory” is for him to apply Obinim stickers

One of the flagship campaign promises of the Akufo Addo led government was the One Village-One Dam project.

But since he assumed power close to two years ago, not even one has been built yet. Ghanaians are suggesting he get Obinim Miraculous Sticker to get the One Village-One Dam Project done ASAP.