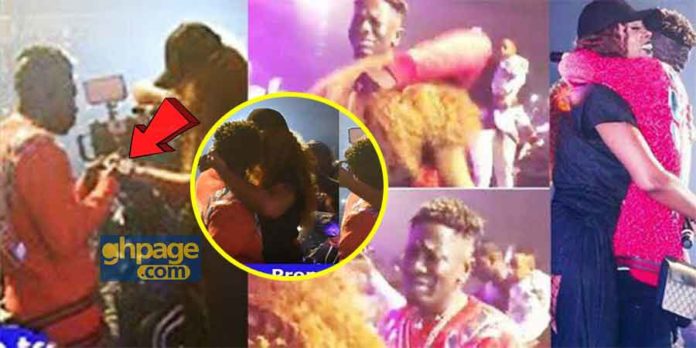 Self-acclaimed dancehall King inna the whole Ghana Shatta Wale has finally proposed marriage to his baby mama Shatta Michy on stage at the launch of his much talked about album launch titled “Reign”.

There had been pressure on Shatta Wale and Shatta Michy to get married this year after Shatta Wale’s friends in the industry decided to take the firm steps by settling down with their other halves.

But Shatta Wale always got an excuse as to why he is yet to get married to Michy stating that he was looking forward to organizing a big wedding so Ghanaians and his fans should chill.

Yesterday, at his album launch at the Fantasy Dome inside the Trade Fair, Shatta Wale finally posted the “Will you marry me?” question to Shatta Michy in front of over 85,000 fans present at his ‘Reign Album’ Launch, Shatta Wale knelt before Shatta Michy and Proposed marriage straightforward.

Date for his wedding will soon be made public…Kindly stay tuned. But our question is did “Hard Guy” Shatta Wale succumb to pressure to get married?

Billboard has ranked Shatta Wale the most-watched artist in Ghana in its international ranking of the top five homegrown musical acts in 11 African countries based on local YouTube views. READ ALSO:...
Read more