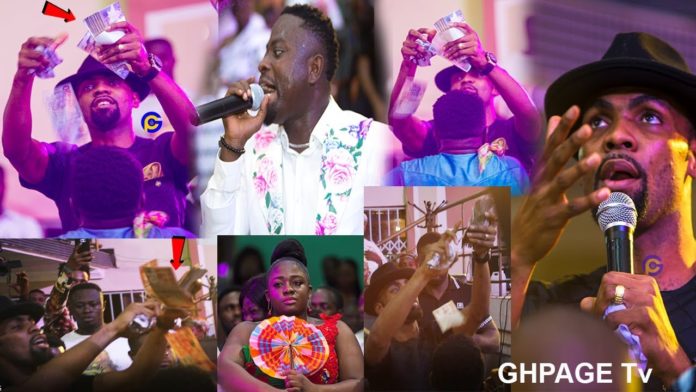 The founder and leader of Anointed Palace Chapel, Rev Obofour was at the album launch of popular gospel musician, Bro Sammy.

Rev Obofour popularly known as Iron Boy was the chairman at the launching and also bought the first copy of the album for 1 billion cedis.

This was announced by one of Rev Obofour’s junior pastors before he arrived and added that the money was ready for pick up.

The launching of the album dubbed “Aduro biaa nkadem” took place on 24th November 2019 at Dichemso Gospel Light Assemblies of God in the Ashanti Region.

The programme was graced by several celebrities like Emelia Brobbey, Tracey Boakye, Kwaku Manu, Wayoosi, Nayas among others.

Also, during Bro Sammy’s performance, Rev Obofour proved that indeed he is wealthy, sprayed huge sums of money on the gospel musician.

This is Bro Sammy’s fourth album launch and obviously it was a star-studded programme.

Share
Facebook
Twitter
WhatsApp
Previous articleKeshia, the Lady whose boyfriend killed her sugar daddy in her bedroom marries another man 4 months after he was jailed
Next articleAlledged Anas Aremeyaw Anas spotted in viral video is indeed the one – NET 2 presenter