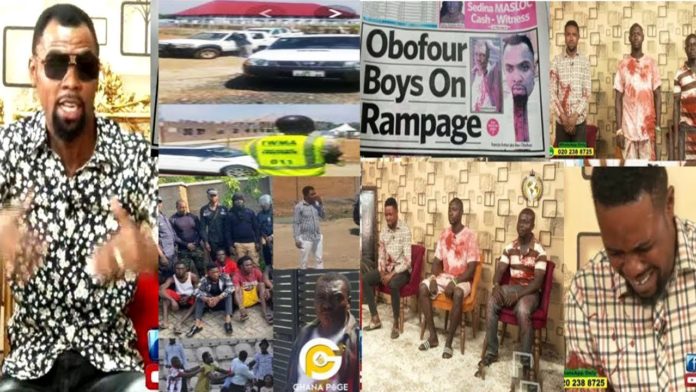 The founder and leader of the Anointed Palace Chapel, Rev Obofour has reacted to reports that his bodyguards attacked and assaulted workers of the Tema Metropolitan Assembly.

In a video chanced upon by Ghpage.com, the man of God explained that none of his bodyguards attacked workers of the MCE.

He also stated that all the allegations leveled against his bodyguards are false and that his boys were rather attacked.

Rev Obofour also showed his ‘macho mem’ who claimed that they were attacked by the MCE’s workers.

They also explained that they never attacked anyone with a knife and that it was paint that stained their shirts not blood.

According to Obofour’s bodyguards, they only confronted the MCE’s workers on why they wanted to paint the building which resulted in an argument and the paints poured on them.

Rev Obofour also rained curses on all those who falsely accused him adding that he will reply them accordingly.

This comes after it was reported that Obofour’s bodyguards subjected workers of the Tema Metropolitan Assembly to severe beatings at the church’s branch in Tema.

According to reports, the MCE’s workers went to the church premises to inspect the building permit.