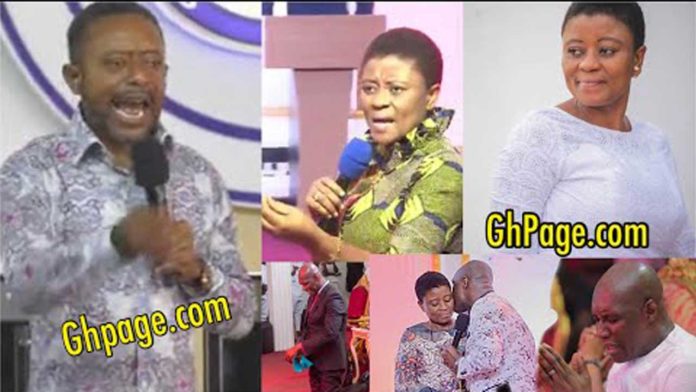 It would be recalled that some days ago, Rev. Isaac Owusu-Bempah who is the General Overseer of Glorious Word Power Ministry International accused the leader of Alabaster International Ministry, Prophet Kofi Oduro of being a womanizer amongst other things.

According to Rev. Owusu Bempah, Prophet Oduro went to the UK and slept with almost every woman, tarnishing the name of other pastors in the country, and creating the perception that they all are the same.

He added that this promiscuous character of the renowned prophet, landed him in trouble with his wife, even to the point of making her cry.

”It is in church that he makes people think that all is well with his wife but in actual fact, they are at loggerheads. Kofi Oduro even sleeps with women in cars and plays a lot of them ‘gala’.” Rev said.

She stated that some people have never had a personal relationship with her husband but have said so many hurtful things about him ever since he chastised the ‘so-called’ men of God about their Prophecies.

She strongly spoke against all the allegations against her husband from abortions to sleeping with Girls.

” The only thing you can say about my husband is how just and principled, he is”, She added.

Well, in another twist Rev. Owusu Bempah has hit back at Rita Oduro the wife of Prophet Oduro daring her to come out within 24 hours to deny ever doing an abortion in her life.

He added that Rita used to be his church member and a chorister who was in a relationship with his for that matter and therefore he(Owusu Bempah) knows a lot more about them and wouldn’t want to bring it out.