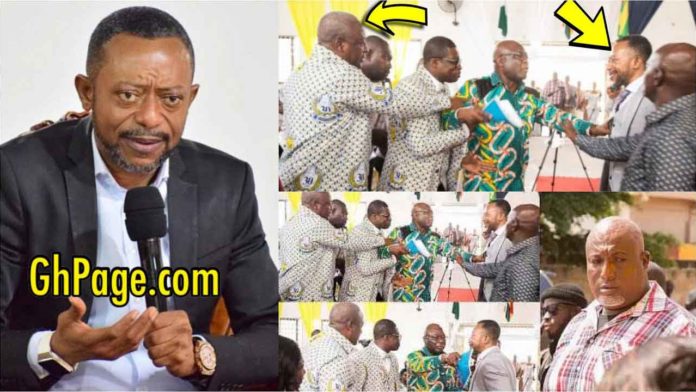 The General Overseer of Glorious Word and Power Ministries, Rev Owusu Bempah has finally explained what really ensued between himself and John Mahama at the Holy Ghost Revival Centre of the Assemblies of God Church.

Rev Owusu Bempah explained that he was invited by the Assemblies of God church to grace their 30th anniversary.

Upon his arrival at the church, he met former president John Dramani Mahama as he was ushered to his seat.

According to the man of God, he decided to take his leave when he was prompted by the Assemblies of God pastor to greet John Mahama as he leaves.

Rev Owusu Bempah disclosed that he agreed to greet him which was why he approached John Mahama.

He also revealed that John Mahama stood up with smiles to give him a handshake but was interrupted by one of his bodyguards.

John Mahama rebuked the bodyguard for almost three times to stop this embarrassing act but he snubbed him.

Rev Owusu Bempah further stated that he didn’t force himself to greet John Mahama and also reiterated his assertion that the National Democratic Congress will lose the upcoming 2020 elections.

This comes after Rev Owusu Bempah encountered an embarrasing moment at the Assembles of God Church on 1st December 2019.

John Mahama’s bodyguards stopped Rev Owusu Bempah from getting close to greet the former president in the church premises.