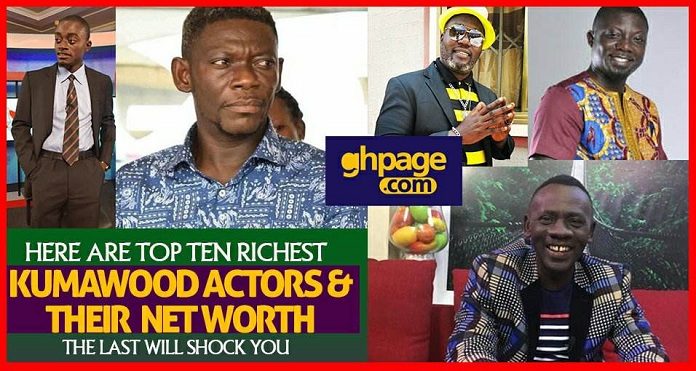 Ashanti Region is the hub of this industry and its actors and actresses are mostly from Akan speaking regions of Ghana.

Due to the high number of movies directors of Kumawood churn out each month (believed to be between 40-50 movies each month), and the high comical scenes not to talk of the use of the local dialect has raised the high patronage of Kumawood movies despite the poor qualities of most of the movies.

In as much as the actors and actresses are not well paid as expected, some actors are doing great financially in the industry.

Ghpage.com presents you with the richest Kumawood actors in Ghana and their Net Worth. Be ready for some few surprises.

Born Samuel Nana Yaw Dabo, this young Kumawood actor has fought against all odds to be counted among the best Kumawood actors in Ghana.

The age of this smallish actor is still a mystery. He claims to be 17 years but checks by Ghpage.com puts his age around 28. Still, he is one of the best comical actors in Kumawood and he is the 10th richest actor in Kumawood with a Net Worth of $30,000.

DON’T MISS THIS: Owner of 3 football teams and 5 other things you didn’t know about Kumawood actor, Yaw Dabo

Wayoosi is undoubtedly one of the greatest Kumawood stars ever. He shot to fame by the kind courtesy of Lord Kenya who doubles as his godfather.Lord Kenya introduced him into the entertainment world.

Lord Kenya formed a dance group called “Mabosa”.He [Lord Kenya] accepted Wayoosi into the dance group which gave him an opportunity to meet other entertainment gurus in Kumasi.

Although the actor has been missing in movies lately due to a sickness that nearly took his life, Wayoosi still falls within the top richest actors in Kumawood with a net worth of  $40,000.

SCROLL DOWN AND CLICK ON NEXT PAGE TO SEE MORE ACTORS