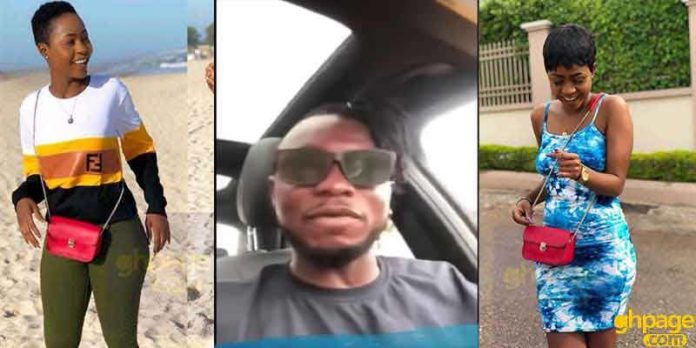 Ghpage.com has sighted a new video of late Facebook slayqueen, Charlotte Abena Woodey having a good time with his alleged boyfriend in a Mercedes Benz car.

In the car, the two could be seen dancing to one Azonto song and having a lovely chat.

Since the death of Facebook slay queen Charlotte Abena Woodey went viral, speculations surrounding her death suggests that she was used for money rituals; a claim made by other slay queens and Snapchat wh*res who knew her.

One of such popular Snapchat wh*re Ama Korea blamed the sakawa boys and in series of posts she made yesterday, she cursed the boys for doing that to one of her own while they could have sacrificed theri[Sakawak boys] mothers.

But the guy who was spotted chilling with Abena Woodey in the Mercedes Benz car has denied such allegations made by other slayqueens stating that if they[Sakawa boys] will use anybody at all for rituals, not Facebook girls who smell bad.

According to him, using them[Facebook girls] as a sacrifice will be rejected because they smell, have [email protected] odours and can’t take good care of themselves, revealing that they have fun with them because of the fake lifestyle they portray on social media.

Read this: Last photo of Charlotte Abena Woodey on hospital before her death

He further revealed that when Abena Woodey was seriously sick and admitted at the 37 Military Hospital, no one visited her advising girls to be wary of the friends they make.

Abena Woodey was in the video seen twerking with a friend in a room supposed to be theirs or one of their boyfriends’ room.