Samini begs on behalf of Stonebwoy's for his outburst at Hitz Fm stating he got carried away by his emotions. 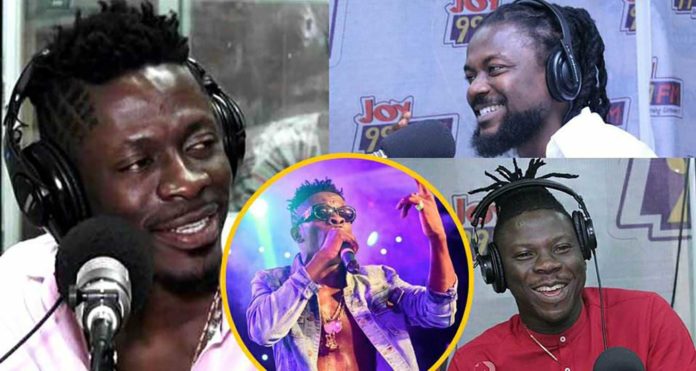 High-Grade family boss Emmanuel Andrew Samini who is known in showbiz as Samini has begged Ghanaians and entertainment enthusiasts to forgive Bhim Nation boss Stonebwoy for his recent outburst in an interview on Hitz Fm stating that he(Stonebwoy) got emotional.

Stonebwoy in an interview on Yaad Settings on Hitz FM with King Lagazee last Sunday angrily lambasted Shatta Wale and questioned his sincerity.

“You go and say I killed my mother and come back and text me that you want peace, you want to make music?” he said angrily.

Samini who was also interviewed on Hitz FM for his reaction stated that his protegee was asked a sensitive issue and it resulted in him getting emotional and that was what led to his outburst.

“…In defense of Stonebwoy, because I am a dad to him in the industry, I say we should cut him some slack because he got angry and emotional about an issue concerning his mum who has passed away…”

He later went on to praise the unity that exists between the current crop of new artistes in the industry. Stating that in as much majority of them do the same genre, the find ways to co-exist but can’t say the same for the older acts who have been in the industry for long.

“…It’s not so unified up there but for the new ones coming up, I see some serious cohesion between them. I see the likes of Kidi, Kuami Eugene, King Promise and the rest under one roof and the kind of vibe that you see amongst these people who are supposed to be competing is priceless,” he said.

“It’s a lovely thing that they should keep because it’s going to trickle down to the generation that will be looking up to them…,” Samini told Andy Dosty on Daybreak Hitz.

SEE MORE: Shatta Wale declares his love for songs from Stonebwoy and Samini