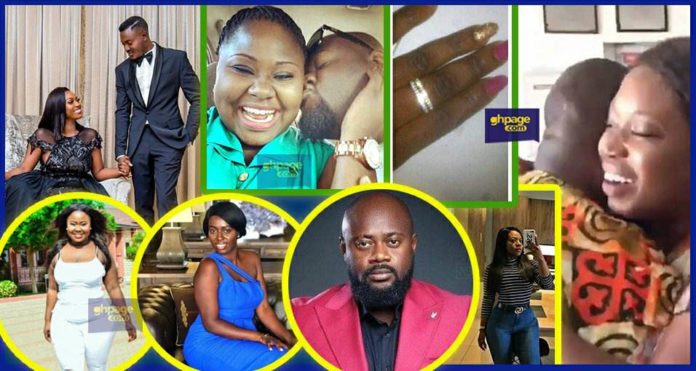 Mr. Henry of Twens Music Duo is probably regretting by now ever releasing his pre-wedding photos since it has opened up can of worms for not just him but ace Ghanaian presenter, Sammy Forson.

A couple of days ago, Henry Twens (Pronounced Twins) released his pre-wedding photos of his bride to be, Linda Antwi and as expected several news blogs picked the story up. And that was when the assault began.

Apparently, Henry Twens is going about proposing and dashing rings to women like he works at the jewelry shop. According to the reports, he has proposed and done knocking for several different women within the same period who goes by the same name, Linda. Yes, you heard me right, all the 3 girls are called Linda.

She apparently dated Abbay Asiedua Mensah (Maame Linda, From Kwabenya) for close to six years whiles dating Linda Esi Buabeng and Linda Antwi. He did knocking ceremony for and gave all promise rings. He is a true Lord of the Ring..lol

In case you don’t remember who Henry Twens (Henry Kojo Gyan) is, let me help you: He and his other colleagued (Manuel Kojo Amegbe) use to go by the name Twens back in the day. They were once prominent in the music industry in the 2000s with songs such as ‘Asem Ben Nie’ ft. Kwabena Kwabena, ‘Playas Want [Reloaded]”, ‘Put Me On Six’ and ‘Makuma’ ft. Coded (4×4).

We are still digesting this promise ring saga from Henry Twens and another one has been dumped on the laps of GHPAGE.COM. Apparently, Henry is not alone in the game of sharing rings to several women and doing knocking ceremony by heart; Sammy Forson is also a strong member of the Lord of the rings team. He is even worse!!.

Interestingly, Sammy Forson is addicted to women with the name Pearl. Sammy Forson started with a young lady called pearl Dzidedi and even had a son with him. He called the boy Jason.

He went on to do knocking ceremony for Pearl and gave her a promised ring and marriage was on the way. From nowhere, he dumped her and moved on to another lady Pearl. He doesn’t even take care of the son from what we have gathered.

The new girl is a fitness coach who goes by the name ObaayaaFit89 on IG. She dated this girl for a year, Bought her a promised ring, as usual, Did a knocking a ceremony and drooled all over her on social media for a year. He dumped her after a year and moved on to the current Pearl.

Two months ago, Sammy Forson went down on his knees inside a bank in Accra and proposed to a beautiful lady later identified as Pearl. Pearl used to base in London until she moved to Ghana to set up Girl Play, a shop that sells body shapers and other beauty enhancers for women.

It’s been two months since Sammy Forson proposed to Pearl, I guess he has 8 months more to go before he moves on to the next Pearl. What I don’t understand about these “Lords Of The Ring” gang (Henry Twens and Sammy) is their addition with same name Ladies!… I Guess We Will Never Know

STAY WITH GHPAGE.COM FOR MORE UPDATES

The veteran Ghanaian media personality, Otwinoko has finally spoken after Prophet Emmanuel Badu Kobi named him as a witness in his son’s...
Read more
Entertainment

Songstress Yaa Jackson following the sudden death of the Kumawood's celebrated and decorated actor Bernard Nyarko and the recent happenings in the...
Read more