VIDEO: Sarkodie gifted customized microphone for being the ‘fastest rapper’ 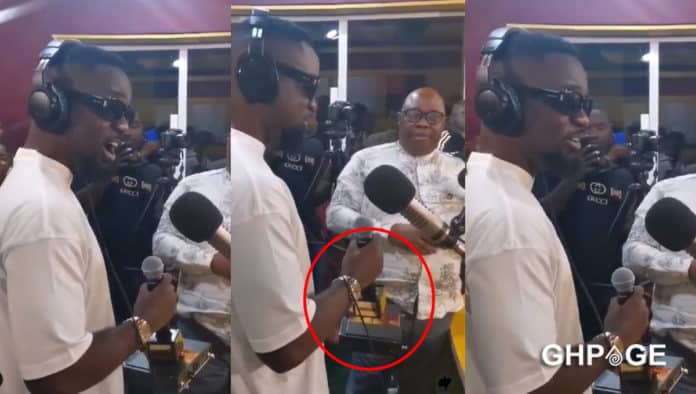 Rapper Sarkodie has received a microphone customized in his name for reportedly being the “fastest rapper” in Ghana, and extensively Africa.

The multi-award-winning artist was presented with the gift by radio and TV presenter Hammer Nti of Pure 95.7 FM in Kumasi on Friday, during an interview ahead of his album release party scheduled for tonight.

Sarkodie arrived in the Ashanti Regional capital on Thursday, July 8, 2021, to make preparatory arrangements for the release party of his upcoming 7th studio album, “No Pressure”.

Prior to the event, he has been on a radio tour speaking about the album.

During a stop at the studios of Pure 95.7 FM, the host of ‘Hammer Time’ morning show gifted Sarkodie with a cordless SHURE microphone and a studio recording device that showed his name boldly engraved on it.

At first sight, Sarkodie thought the microphone was a dummy and so, said he was going to display it on a shelf holding his awards at home.

He was subsequently prompted that microphone was real and not just an award plaque for display purposes.

The “No Fugazy” rapper was overwhelmed with joy by the gift as it came as a surprise to him and his team.