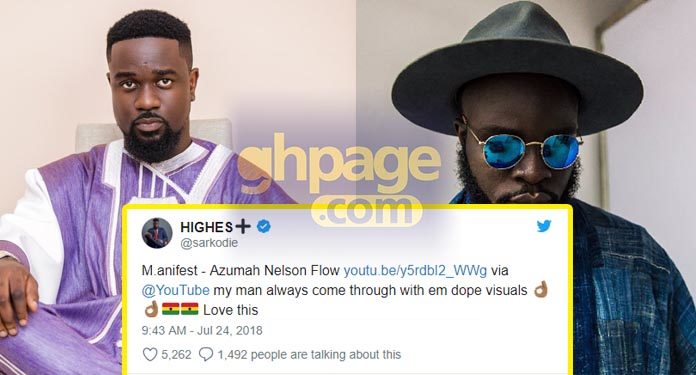 Manifest yesterday dropped the official music video for his single ‘Azuma Nelson Flow’ which was released in December 2017.

The song was composed by M.anifest in honour of Ghanaian legendary boxer, Azumah Nelson whose birthday fell on July 19, the same day the music video was officially released.

Born Kwame Ametepee Tsikata, Manifest is one of the best rappers Ghana has ever seen in recent times. He is simply great but before he is even given the crown by Ghanaians, Manifest has boldly declared he is the best rapper of his generation.

Sarkodie and Manifest for a while now been battling over who deserves the best rapper crown in the country.

read also: Sarkodie fans angry with him asks him to also launch his album privately

While Sarkodie fans call him King Sark because of his lyrical prowess and the fact that he has bagged uncountable awards, Manifest fans call him God MC because they believe his rap punches are deep!

Entertainment enthusiasts thought the long-standing feud between the two rappers will forever remain as it is but it has taken a nosedive as the rapperholic boss has heaped praise on the God MC following his release of ‘Azumah Nelson’ music video.

This gesture from Sarkodie will definitely go a long way to patch up the acrimony that exists between and usher their respective fans to the path of reconciliation.