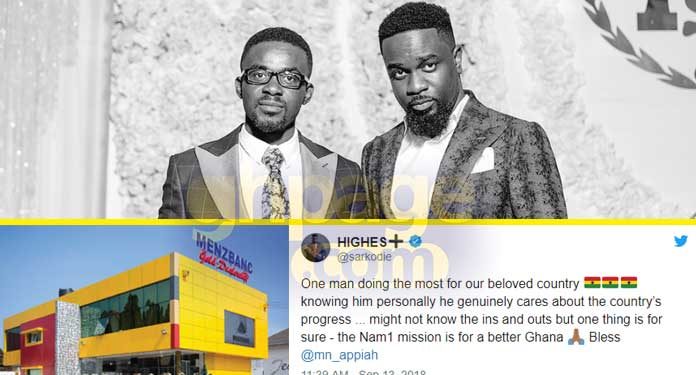 Michael Owusu Addo also known in music circles as Sarkodie has added his voice to the ongoing back-and-forth brouhaha between Menzgold and Securities and Exchange Commission (SEC).

Read also: Nana Appiah Mensah Is The Jesus Of Our Time – Bulldog

In a letter dated September 12, SEC said after its thorough investigations on the activities of Menzgold, they have found out that, the Nana Appiah Mensah-owned firm does not have the license to trade in gold collectables from the public.

Until that time, they have asked the company to stop business operations.

Nana Appiah Mensah angrily reacted to the directive and in a post on Twitter, he clearly stated that he is not less of a Ghanaian and if it becomes necessary, he will pay for his freedom.

This directive by the SEC to close down Menzgold Ghana Limited has angered a lot of Ghanaians. Artist and actors who have signed unto Nana Appiah’s label have thrown their support behind him likewise celebrities who are not signed or have no business to do with them.

Sarkodie in reaction took to Twitter and made the world aware that he knows Nana Appiah Mensah, the Chief Executive Officer of Menzgold has good plans for the country and would not use dubious means to deceive the populace.

“One man doing the most for our beloved country ?????? knowing him personally he genuinely cares about the country’s progress … might not know the ins and outs but one thing is for sure – the Nam1 mission is for a better Ghana ?? Bless @mn_appiah”

Read this: Tracy Sarkcess and 4 other celebrities who are solidly behind Menzgold

One man doing the most for our beloved country 🇬🇭🇬🇭🇬🇭 knowing him personally he genuinely cares about the country’s progress … might not know the ins and outs but one thing is for sure – the Nam1 mission is for a better Ghana 🙏🏾 Bless @mn_appiah pic.twitter.com/mrSGgx47d9