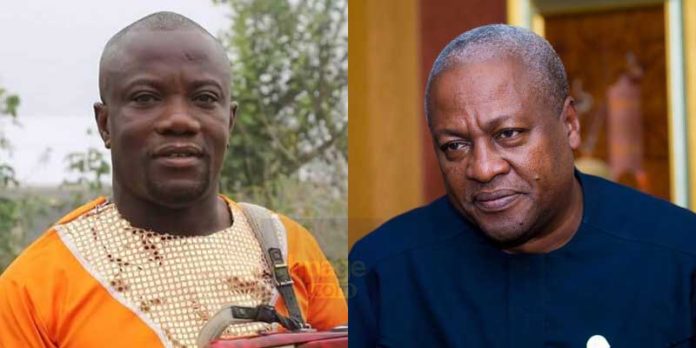 A new owner of the “Bobolebobo” song, Pastor Isaac Sie has surfaced after the song was used by former President John Mahama as his campaign song prior to the NDC Congress which will be held in December to choose a flagbearer for the 2020 general elections.

Pastor Isaac Sie in an interview with Berla Mundi and Giovani Caleb on Starr FM claimed the song is his and not that of Evangelist IK Aning.

According to Pastor Isaac who’s now claiming ownership of the song, he had an encounter with Evangelist IK Aning about the song before it was worked on in the studio before becoming a hit.

“The song is mine, it has been mine for many years. In fact, I have had an encounter with the evangelist and he told me that I can’t do anything to him because I don’t have anybody to help me, but I have the document to show anyone who will be willing to help me.”

“He said it in presence of my lawyer; he didn’t know he was a lawyer. I am the originator so any compensation they want to give, they should give it to me,” he said

Meanwhile, Evangelist Anning has dismissed the allegations and noted that he has enough people and enough evidence to back his claim as the true owner and composer of the song.

Read this: Sofo Appiah aka Biblical caught in bed naked with a married woman

“I have many songs since 2006 that has the word “bobolebobo” in them so you can simply go back and listen to some of the songs I have made, it runs through so everyone who knows my music knows it is for me. The word simply means fire and trumpet as people assume”.

Reacting to the song been used by the NDC as their 2020 campaign song which he called them out for some compensation, he noted that the NDC has contacted him for compensation for the use of the song.

“ And yes, the NDC people have contacted me so we are talking”.

Read more: Osofo Appiah caught with a married woman was once cursed by Prophet 1