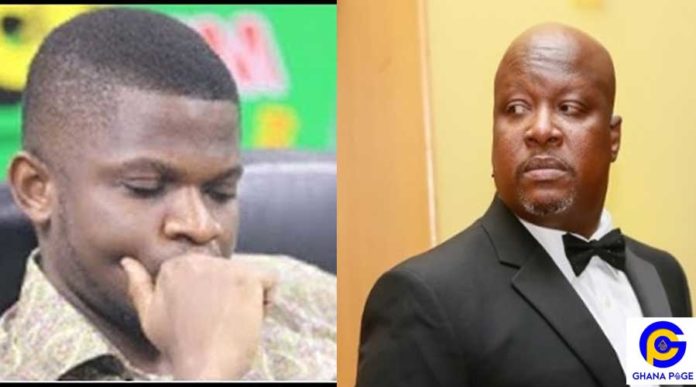 Kwame Sefa Kayi was perplexed Sammy Gyamfi could walk into his studio after tarnishing his reputation on another radio station.

The host of the morning show dubbed ‘Kokrokoo’ asked Sammy Gyamfi politely to walk out as he was not happy with his presence in his studio.

According to him, Sammy Gyamfi didn’t have the courtesy to apologise for impugning his integrity when he (Sefa Kayi) cautioned him.

“I don’t know what you are doing on my show. If you wouldn’t be bothered I want you to leave.

You can’t spread lies about me, impugn my integrity, call me names and come on my show. Honestly, I am not happy you are here because you didn’t have the courtesy to go back and correct it when you realised you were wrong.

You are here on the same platform that you accused that I am using to perpetuate fraud and hypocrisy. I am surprised you are here to try and sweep it aside”, Sefa Kayi stated.

It will be recalled that Sammy Gyamfi described the award-winning Journalist as a hypocrite for giving importance to Samuel Ofosu-Ampofo’s alleged leaked tape.

According to Sammy Gyamfi, Kwame Sefa Kayi did not play any leaked tape from the ruling New Patriotic Party but gave much attention to the alleged leaked tape by Samuel Ampofo.

“These bunch of hypocrite journalists will never play leaked tapes on their shows so far as they have negative repercussions on the NPP. However, they are quick to play leaked tapes that involve the NDC like we are seeing today,” Sammy Gyamfi said on another radio station.

Sammy Gyamfi, however, apologised to Kwame Sefa Kayi after he was persuaded by the other panellists present.

Initially, he was reluctant in offering the apology because he felt the issue was in the past and it wasn’t the right platform for him to do that.

One of the oldest anti-malaria drugs in the world, especially in African, is the Chloroquine. Now, through the chase...
Read more
News

A 42-year-old man identified as  Daniel Baah has been apprehended by the police for impregnating his own 14-year daughter in Accra.
Read more
News

The police have launched a manhunt for a 52-year-old suspect identified as Senyatse Lucas Phasha, who killed his four children by stabbing...
Read more