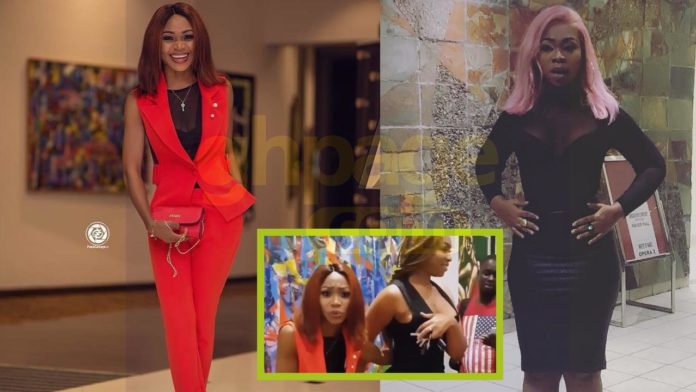 Embattled baby mama of self-acclaimed dancehall king Shatta Wale, Shatta Michy has sent out a word of advice to her fellow actress and slay queen Rosemond Brown when they met at the just ended 2018 Ghana Football Awards.

In a video shared online by Rosemond herself, Shatta Michy called her to come over and hug her after which she advised her to keep doing what she is doing but make sure she doesn’t offend anyone because if she does that the police would come after her.

“Polo of life, Polo of life, come come come, come and hug me. It’s all love on this side and I understand the showbiz, do your thing, just don’t offend anyone, otherwise, the police will arrest you”.

Also Read: I used to cry whenever there was a bad news about Shatta Wale – Michy

Rosemond Brown Aka Akuapim Polo has really become a thorn in the flesh of Ghanaians after she was interview on the VGMA 18 awards night where she shared her view on Moesha’s interview on CNN.

Since then she is always passing comment and alleging some popular celebrities have banged her in order to make her a celebrity but they all failed to make her get to that height.