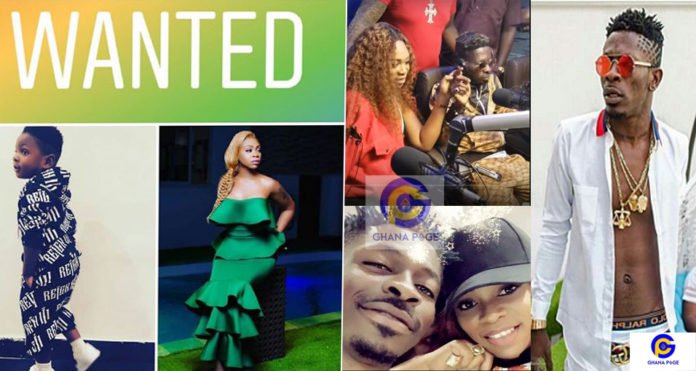 Shatta Wale and his baby Mama Shatta Michy are in headlines again on social media, this time with the worst news ever.

Obviously, their relationship might be on the verge of collapsing if the established rumors going rounds on the internet are true and not one of their usual attention seeking tricks.

Read Also: Mubarak Wakaso in trouble as Slay Queen threatens to expose him

According to a post sighted on Instagram by Ghanapage.com as posted by one of Ghana’s controversial Instagram pages, thosecalledcelebs, Shatta Michy has robbed her boyfriend, Shatta Wale.

Read Also: Kwesi Ernest chases Shatta Wale for his money after he failed to show up for a concert

The post added that the SM4Lyf first lady also runs away with his newly purchased Range Rover, their son Majesty and some other important documents.

A picture of Michy and her son was posted with a wanted caption. read it (unedited)

“Let me tag u so dat it enters ur brain @michygh ….how many people will believe dat…de love i have for Michy connected me to @shattawalenima?? I just love de girl so she is de last person i will do her bad. I refused her husband proposal on many occasions and even refused to meet dis guy in person cux i didn’t wanna go into their relationship n de love i hv for Shatta no…wen we meet today…S*X will come in so i do hide n seek wid him oo ?…but wat am hearing no de3…i think dis is de right time to take ma man tho cux i can’t see him dead…he gotta get sound mind to do more music for de nation.

Read Also: Lady confesses of marrying her step-dad after her mum divorced him

“Michy wherever u are hiding with Majesty. ..my husband Range Rover and other important documents. ..bring dem back baby…after stabbing ur husband back with Scissors and sharp objects…u run away with all these stuffs…why are u doing dis to urself???? Do u want me to believe in those hard drugs n many people tagged u???? Sweetheart. ..people were about to bring ur stuffs out..naked videos ..voice note..messages n many but i begged dem in DM n everything is wid me nowww…..wat at all do u want from dis world???? The story continues. ………………tomorrow. ..gudnite.”

However, we are still not clear on whether these allegations against Shatta Michy is true or not. But any further update shall be published.

Read Also: Reason why Fella Makafui’s cars was seized by ex-boyfriend pops up

Share
Facebook
Twitter
WhatsApp
Previous articleChief Imam hails Rev. Korankye Ankrah after he preached on the living in harmony with each other
Next articleNAM 1 and wife are cooling off somewhere in London – Afia Schwarzenegger reveals