Shatta Michy Is A Year Older Today. Here Are Some Things You Need To Know About Her 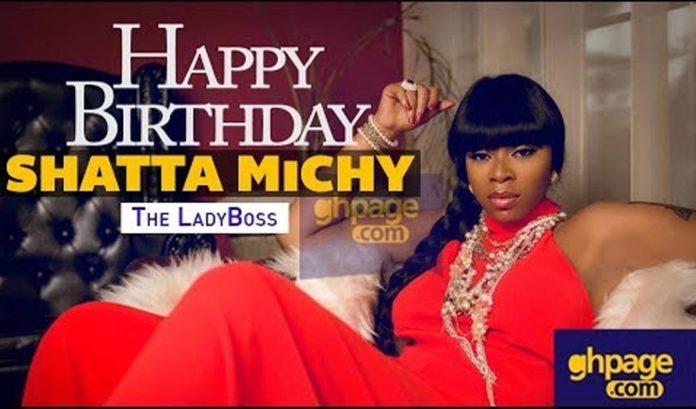 Baby Mama of Dancehall artiste Shatta Wale turns a year older today. Here are some things you need to know about her.

Shatta Michy’s was born on 6th May 1994 and was named Diamond Michelle Gbagonah, in Norway. She believes in the principle “Nothing is impossible, the word itself says ‘I’m possible”!

Shatta Michy, as she is affectionately called is a young adventurous and self-motivated lady who believes in the principle of multi-tasking and its relevance to growing global trends. A go-getter who is aspiring to become exceptionally successful in her chosen fields of endeavors – human relations and marketing.

Her goal in life is to “study hard, work hard in order to find herself and this can only be achieved through hard work. Setting goals means becoming very unique in your ways and approach to set you aside from other people”, according to her.

Also Read: Am Not Willing To Give Shatta Wale Another Chance – Shatta Michy Tells Her Mom[Screenshot]

After several encounters and interactions with the always cheerful Michy, I can say on authority she is a very happy person, filled with humor, laughter, and jokes. Before you get a different interpretation of this, she can be calm, cool and collected when she gets focused. Her emphasis is on substance as exhibited in her way of doing things, ranging from academics to her everyday activities. She is simply fun!

The former General Arts student of Mfantsiman Girls High School reveals her highest moments in life to be whenever she manages to achieve something great or learn something new which makes a positive impact on her life as well as those around her.

“I love to learn new things and achieve greatness. At my leisure time, I will be either decorating, cooking, looking for new recipes and reading materials to develop myself as a person”, she said.

An individual totally in love with nature, Michy studied Human Relations Management at Zenith College after her secondary education and currently taking a course in Marketing at the Wisconsin International University College.

She is aspiring to study law after her current course. “I grew up wanting to become a flight attendant but as you grow you have a paradigm shift sometimes. At the moment, I’m considering studying law after my current course.

I will hopefully specialize in criminal law” Apart from the Almighty God, one of Michy’s pillars in life is her adorable mother who has always been there for her through the good and the bad. “It’s an opportunity to reveal to the world an important person in my life by name Gloria Morrison.

That is my mother and my strength all these years. She is a hotelier and a very busy person but has always made time to be there for me and I appreciate her for all the effort.

She’s is just a darling and God sent to make me who I have become at this point”. Quite recently, Shatta Michy was unveiled as one of the cast of a drama television series titled “Cocoa Brown”.

The series is based on the life of broadcaster Deloris Frimpong- Manso, popularly referred to as Delay.

About her involvement in “Cocoa Brown”, Shatta Michy said “After my interview on the Delay Show, she mentioned something about my personality and her project. After a few minutes of discussion, she asked me to audition for the role.

According to her and her team, I nailed it effortlessly meaning I was getting a role. It was challenging as I had to combine with the other things I was doing at the time. I thank God for making me go through and the future for me looks bright in this newly found love”.?According to Michy, she wouldn’t have come this far if she didn’t believe in herself with a conscious effort to make things happen. A staunch believer in Christ, she is convinced everyone can become whatever they want to if they work towards it and ask for direction and vision from God.

In addition to becoming a lawyer, Michy aspires to be in the league of top rated business moguls and a respectable person in society.

SEE MORE: Break-up of the century – Shatta Wale and Shatta Michy are no more— They have allegedly broken up