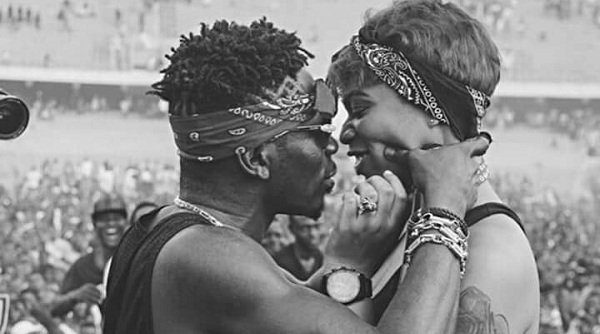 Self-acclaimed Dancehall King, Shatta Wale has opened up about how his affair with his baby Mama, Shatta Michy started and why after all these years they are still not married.

According to Shatta Wale, Michy’s family despised him and even sent the police after him when he started chasing their daughter. Shatta said:

“Michy’s family respects me a lot, not because I’m Shatta and I’m so popular. They actually chased me with police when they heard I was a Nima boy dating their child.”

“Imagine someone whose mother lives at a place like East Legon and gets to know that a guy from Nima is chasing their daughter.”

“They didn’t want her to experience the ghetto life so they initially kicked against our relationship. But I always say Nima is my America, that place is my blessed land.”

“Nobody can stop that blessing in Nima and people in Nima who are elders know there’s blessing in that area. My blessing is in Nima,” Added.

The award-winning musician touching on why he still not married to his baby said:

“We understand each other and our families are aware we are together and we are like siblings growing as a family. Sometimes I think we need time. There is no need to impress people that we are married. Sometimes the weddings and the whole ‘dondoo dondooo’ doesn’t really mean anything.”.

“in the family way, they are aware we are together but people who are ready are getting ready to get married but we are not yet there. Shatta Michy has a lot of things to do, she wants to finish her degree course, she wants to do business on her own and others things. Me too, I want to really get more into my real estate business.”

“Shatta Michy is still very young and she is currently in school, she doing her business management thing. So when things get to where it has to be, she would also get whatever she wants,” Dancehall King Shatta Wale concluded.

SEE ALSO: 11 areas in Ghana with the Most Sakawa / Fraud Boys