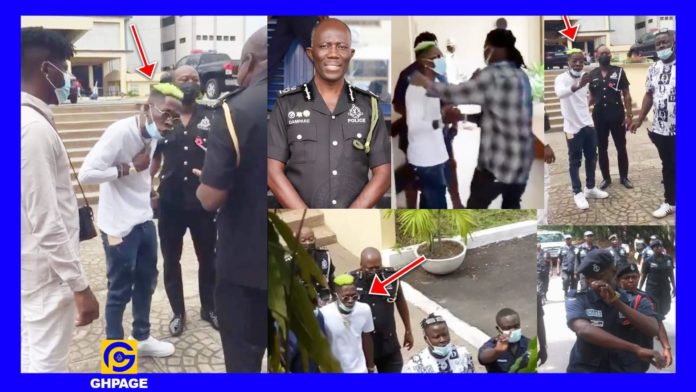 A tall list of Ghanaian celebrities and stakeholders in the creative arts industry honoured an invitation by the Inspector-General of Police, George Akufo Dampare at the police quarters in Accra on Wednesday, November 9, 2021.

Unfortunately, the occasion was marked by some level of resentment from dancehall artiste Shatta Wale after a police officer made him feel uncomfortable during the meeting.

While at the conference room, Shatta Wale decided to take out his phone and use but he was quickly stopped by one of the policemen present.

In a viral video making the rounds on social media, Shatta Wale is seen confronting a police officer to ask why he was asked to put aside his phone when his colleagues were allowed to use theirs.

See the video below

It was reported by our outfit yesterday, the IGP has extended an official invitation to Ghanaian celebrities for a closed-door meeting.

This closed-door meeting with the creative arts follows the initiative by the IGP to meet with diverse interest groups across the social strata to interact on better policing in Ghana.

We can’t fully establish the core reason for the meeting but according to reports available to us, the IGP met with the celebrities and some industry players for them to voice out their concerns and how they conduct themselves on social media.

Watch snippets from the meeting below