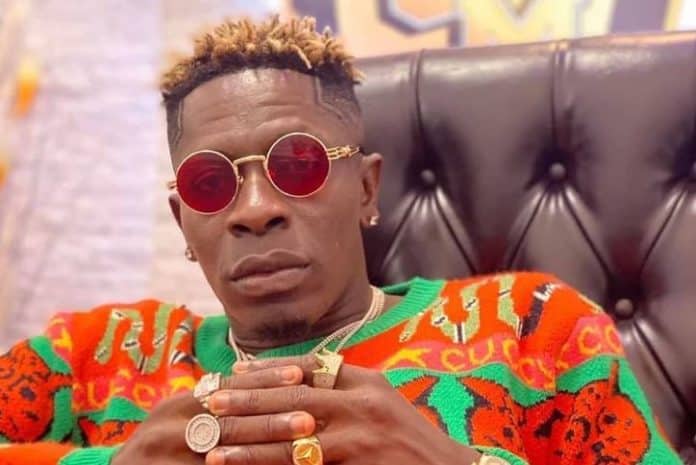 Rowdy Ghanaian dancehall artiste Shatta Wale has rendered an apology to the management of Oswal T Constructions over the scuffle that ensued between him and workers of the company Monday, May 31, 2021.

GHPage.com earlier reported on how Shatta Wale allegedly mobilised thugs to attack an Engineer in charge of the construction site for preventing his use of a road under construction off the Adjiriganor stretch.

In a one-minute video address, Shatta Wale described the incident as “unfortunate” amid begging for forgiveness from the Engineer, Mr Kennedy Acquah.

He revealed how the owner of the construction firm had been someone he admired and always wanted to meet.

“The man in question is my dad, he’s my friend. He is somebody that I always wanted to meet but it’s so unfortunate things had to happen this way. I also want to say sorry to Kennedy for everything that happened and I believe he will also find a place in his heart to forgive me. This is Ghana and we are one people and that’s how we live,” said Shatta Wale.

The Shatta Movement boss vehemently denied paying 4 million cedis for the road to be constructed.

Following the incident, Mr Kennedy Acquah and Shatta Wale have shared insight into what exactly happened.

Narrating his side of the story, Kennedy Acquah disclosed that Shatta Wale approached him on Saturday and ordered them to extend the road works to his office.

He recounted how Shatta Wale and his boys pounced on them at the construction site despite the roadblock sign on the road.

In an interview on Hitz FM, Shatta Wale denied assaulting the workers but explained that he only confronted them as to why they were working on a road that has already been tarred.

According to Shatta Wale, he complained to the constructors about the untarred road leading to his office which needs to be worked on.