All Is Not Well: Shatta Wale Beats Up Shatta Michy And She Nearly Stabbed Him In Anger 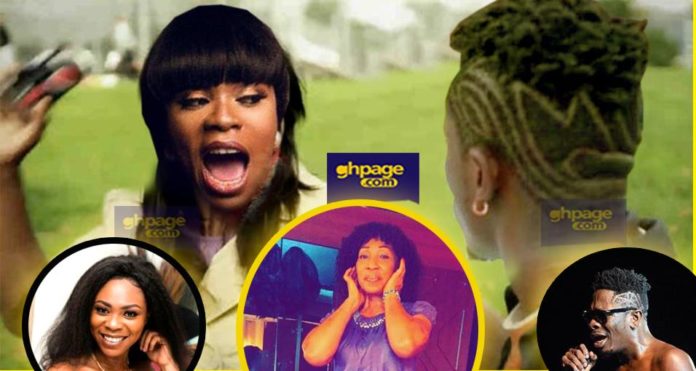 There is an alleged war in paradise and it will be a disappointment to the millions of fans of the Dancehall-King if it turns out to be true.

Chatters Ghpage.com picked from the camp of Shatta Wale has it that, there is a serious bloody fight between Shatta Wale and Michy.

Yes, couples do fight. And yes it’s not always rosy in a relationship but it appears that of Shatta Wale and his baby mama is turning out to be too bloody and it’s unacceptable.

Both Shatta and his Baby mama being a Facebook addict, it’s not surprising both have started telling their side of the story. Shatta Wale first broke the silence in a post without explaining much. He posted that: “When a woman chases you with a Knife ..DAWG AM …..!!!!!! Boys be wise ….Am done ..The wise will understand !!!!!!!!”.

Many did not take it any serious until Shatta Michy replied on her Facebook page revealing that Shatta Wale beats her and accused Shatta Wale of running to social media to seek sympathy with his post. She posted:

“The world is full of hypocrites. They hurt u and later come seek internet sympathy. The world knows what a good woman looks like. Unfortunately, & ungratefully, you don’t. Thanks for the bump on my head.”

Prior to that, she has posted claiming someone is ungrateful and keeps attacking her day by day and it’s even better to die. She posted: “With all the ungrateful & unkind people in the world attacking us day by day, sometimes death is more peaceful.” Well, we now know it was directed at Shatta Wale.

Just an hour after that post, Shatta Wale came with his own big revelations. According to him and considering the trend of the conversation, Shatta Michy slapped and pulled a knife on him in front of her own mother (‘Shatta Wale’s mother in law’).

SEE ALSO: You fight Zylofon you fight your own progress – Shatta Wale

He lamented about how people have not shown him, love, as he thought they would. He accused Michy of sometimes hurting herself just to send a signal that he did it to her. And people believe her because of how he is. He posted:

“One of my biggest mistake in Life Is believing people will show me the same love I have shown them..You always cut yourself either with blade or burn urself or sometimes break bottles and glasses to still hurt yourself for the outside world to believe it cuz of the way of life I live in the industry.So people will say and I quote :Abi shatta dierrr the way Ibe basabasa he go fit do am ” my God I worship does not sleep for people like you to tarnish his image…He has never made me lost a battle..The empire is my witness on how I have kept this in me for so long..Woman kakai eeeeiii abeg come back again with better lies CUZ TODAY YOU SLAPPED ME INFRONT OF YOUR OWN MOTHER HOLDING A KNIFE TOO… What a wow !!!! Clap for yourself ..Julio bone etc are my witnesses ..Good night Ghana ??!!!” 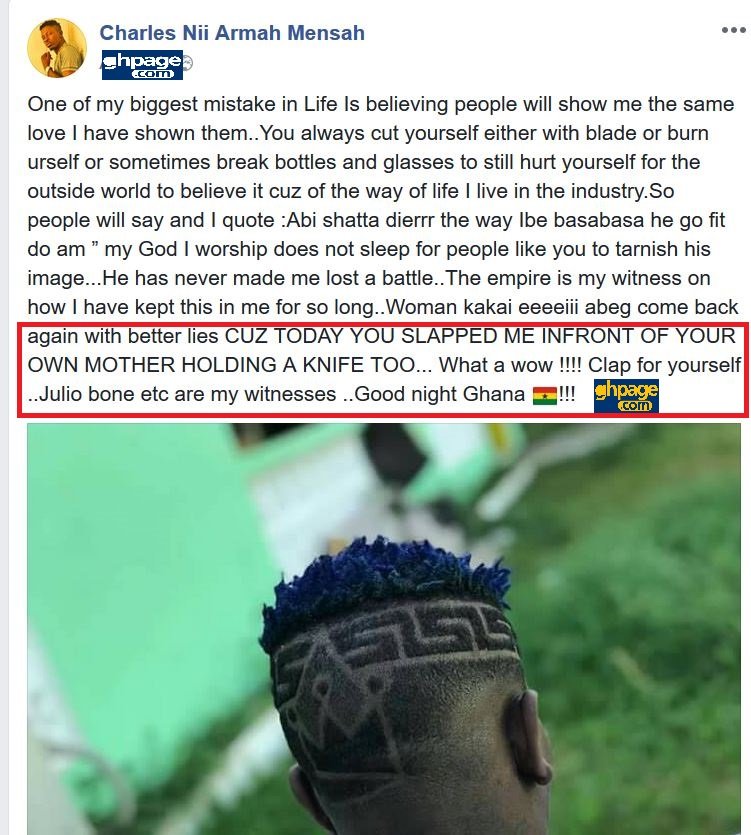 Its obvious things are not well in the home of Shatta Wale. And Ghpage.com will update you on more soon. But considering how these two love publicity and how Shatta Wale couldn’t after the VGMA 2018, we hope it’s not a publicity stunt.