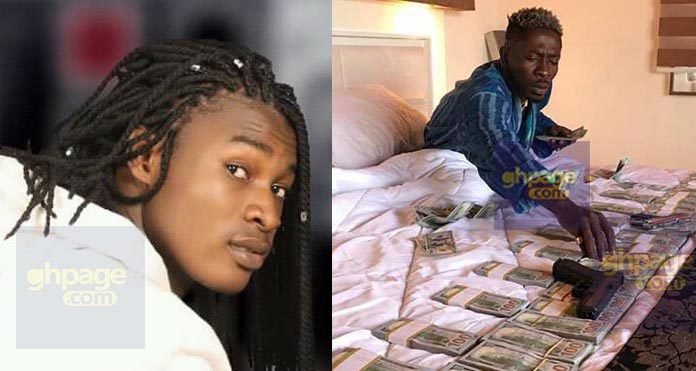 Self-acclaimed Dancehall King and ‘Gringo’ hitmaker Shatta Wale took to social media to flaunt bundles of dollars which he claimed were aimed at motivating his Shatta Movement (SM) fans.

Shatta further bragged that counting money has become his hobby. He does it every day and there’s even more money locked up in his bank account.

“While Stone is busy playing cheap gigs for his pocket, Shatta is shooting multi-million videos. Look sharp! Ewe eagle” his post read. Willi Roi’s Comments became the talk of the town as the board of Zylofon Media disassociated itself from Willi Roi’s immature comments.

A new video has been spotted by Ghpage shows an Ashaiman-based rapper revealing the secrets behind the money flaunting on Social Media.

In the video, the prince of Ashiaman, Saddiq Shishi took to YouTube to mock Shatta Wale Over faking dollars on his bed to motivate die-hard fans of his Shatta Movement. The rapper showed us how Shatta Wale printed fake money to brag Ghanaians.

“Yoo Shatta Wale Wasup; champion!!! I hear something wey make I bore yuh kroaaa aswear. Yea as I hear dey thing; I no feel kroaaa, aah yuh come back to Ghana? Yesterday I dey here wey I dey listen to shout out to Madingo, greengo, vino, meno, wey my omg.com call me laa, e say the money yuh dey count for the video inside no, the dollars yuh dey pack! pack!! pack!!! For the bed top no e say all be fake, e say all be fake laaa eno real, so yuh no get dhat kind of money laaa?”, revealed by Saddiq Shishi.

READ MORE: The breakup of Shatta Wale and Michy could be for hype?