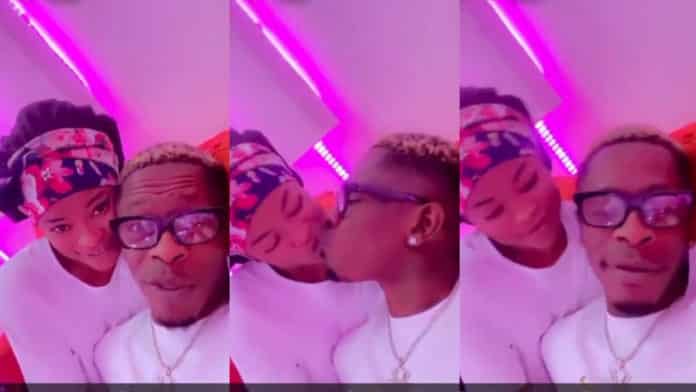 Shatta Wale has revealed his plans of marrying his newfound girlfriend in order to give credence to how serious he deems the new amorous relationship.

After his relationship with Michy fell apart, Shatta Wale has found it hard finding a suitable partner who tickles his fancy and ‘brings the best out of him.”

Since the SM President made it official that he was dating the Elfreda lady, the smiles on the face of the hardcore artist have broadened, his videos look lively and his eyes usually shine with great admiration and a touch of love.

That was something missing in the life of Shatta Wale.

On the back of that and the conviction he has about his new relationship despite the naysaying, Shatta Wale has revealed that he looks forward to walking Elfreda down the aisle.

In a lovey-dovey video in which Shatta Wale seized the moment to kiss his girlfriend Elfreda and to spite his ‘enemies’, Shatta Wale said he was ready to marry her.

The shattered heart of Shatta Wale which was broken as a result of his previous relationship has started to experience a renewed sense of revival as Elfreda seems to be picking up the pieces together.

Already, Shatta Wale has purchased a Range Rover for Elfreda and their social media sessions give sparks of two people in love.

The video below shows a Shatta Wale who appears ready to take his new relationship to the next level with the ultimate aim of marrying Elfreda, his new girlfriend.