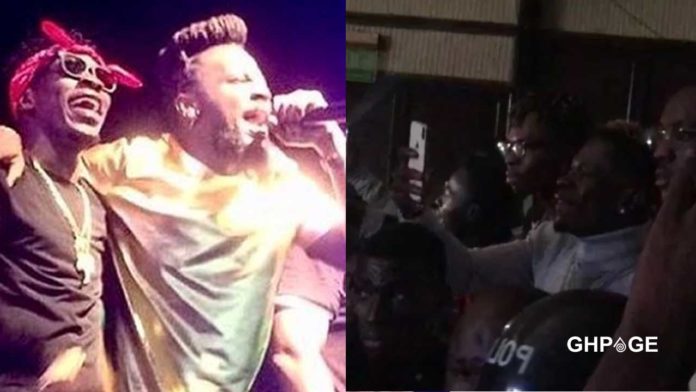 Two of Ghana’s biggest act Shatta movement’s Shatta Wale and High-Grade Family boss Samini had on the neck of each other for some time now until they recently settled their feud.

People thought the two after settling their differences would drop a song together but to date, they are yet to do that.

Well, at the Pae Mu Ka at 20 concert held yesterday to celebrate the first album of Ghana’s rap Sofo Obrafour and his achievements in the music industry, something extraordinary happened.

Though several artistes were invited to perform and grace the occasion, Shatta Wale’s appearance at the event was a surprise since nothing was heard about him going for the event.

Though he was not billed to perform, Shatta Wale came through to support the legendary rapper.

Shatta Wale came into the auditorium not long before his longtime rival Samini came on stage to perform his ‘My own’ song with actress Nana Ama McBrown.

An excited Shatta Wale who couldn’t sit while people enjoy Samini’s performance jumped up and started dancing to the song.

From the video, one could see that Shatta Wale was truly enjoying him to the extent that he had to pull out his phone to record his rival’s performance and himself having fun.