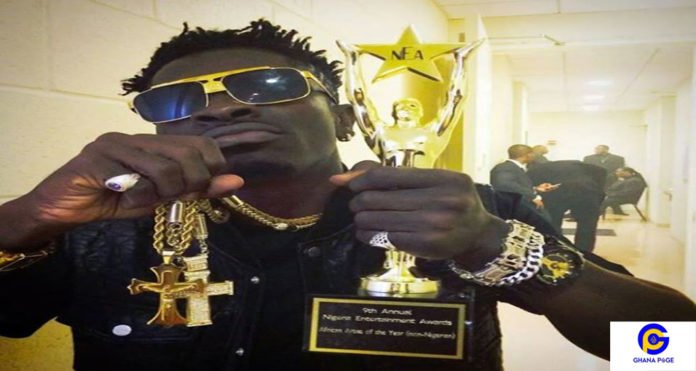 Self-acclaimed dancehall king Shatta Wale has listed the total number of awards he has won ever since he reappeared in the music industry 6 years ago.

We all can recall that Shatta Wale was once called Bandana who released his first album around 2004.

The album which by then contained his energetic hit song dubbed ‘Mokohoo’ topped a lot of Ghanaian musical charts back then.

The controversial artiste by then Bandana after the release of the hit album went into a musical break for close to 10 years before he rebranded and came back again in 2013 as Shatta Wale.

Well, in 2013 back as Shatta Wale, he created a mess at the VGMA after he lost the Reggae Dancehall song of the year to Kaaki and it gave him bad publicity.

But as we all know him he took advantage of the opportunity and released a blow hit song ‘Dancehall King’ and that was the beginning of the success story of Shatta Wale.

Within the six years after the VGMA disturbance to the release of his first ever nationwide banger, Shatta Wale can look back and feel proud of himself.

To his success story, six years up and down sweat has won Shatta Wale 71 awards and produced a lot of hit songs.

Read Also: ‘Stonebwoy unfollowed me after he refused to pay for ‘Mane Me’ beat’ – Producer Vacs

The sensational artiste has taken to social media and has listed all the awards he has won within these years.

Ghanapage.com says congratulations to Shatta Wale and we wish him more success.