VGMA 2019: Shatta Wale mocks Sarkodie for begging fans to vote for him 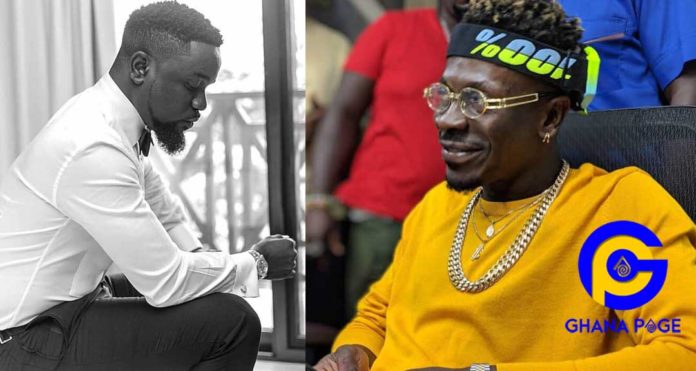 Shatta Wale, the Music man for 2018 according to 3 Music Awards has thrown a sharp jab at Sarkodie few hours after Sarkodie took to his social media handles to plead with his fans to support him by voting massively for him to win at this year’s Vodafone Ghana Music Awards.

According to Shatta Wale, no artist was chatting and talking to their fans to vote for them except him but now that they have seen him dominating in all categories, Sarkodie has started copying him.

Shatta Wale claims that Ghanaian artists including Sarkodie do not respect the awards but for him, he values everything that comes from doing music. Shatta Wale, as usual, bragged that he will always be the leader for others to copy from.

“Have you seen what I was doing on social media, no artist was doing it but after I started, now they are beginning to do same” .

“Those artists don’t respect the awards. As for me, I respect everything that comes with music,” he added.

Shatta Wale has never hidden his desire to win massively in all the music awards scheduled to take place this year. He has been canvassing for votes for weeks now. Due to his hard campaign, he won 8 awards at the recently held 3 Music Awards.

From there, he has been campaigning hard to win massive at the VGMA 2019. But Sarkodie today took to his social media handles to beg for votes too.

He shared a video of his awards and thanked his fans for making him the king and pleaded with Ghanaians to vote from him to win many awards at the VGMA.

SEE ALSO: Photos of Fella Makafui’s mother selling charcoal by the roadside weeks after Fella claims to have opened a new Supermarket for her pops up [See Photos]

It is this act Shatta Wale feels Sarkodie is copying is style and chose to mock him on social media a few hours after Sarkodie made his appeal.

Billboard has ranked Shatta Wale the most-watched artist in Ghana in its international ranking of the top five homegrown musical acts in 11 African countries based on local YouTube views. READ ALSO:...
Read more