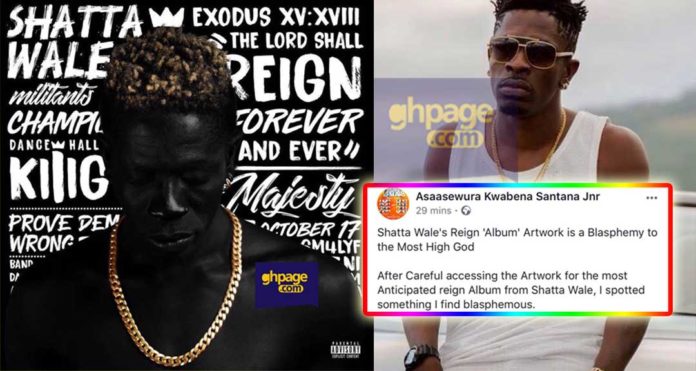 The host of Efie Akwantuo on Brenya FM, Asaasewura Kwabena Santana has made a shocking revelation on Facebook concerning the just unveiled Shatta Wale’s Reign album cover art. According to the popular presenter, the artwork is blasphemous to the Most High God.

According to Asaasewura Santana, Shatta Wale mocked and presumed to take the position of most High God with his artwork and he finds it disgusting.

SEE ALSO: Shatta Wale finally releases the Cover art for ‘Reign album’ and the songs to expect on the album

After Careful accessing the Artwork for the most Anticipated reign Album from Shatta Wale, I spotted something I find blasphemous. I try not to mingle religion with Arts and Creative Works but this keeps bothering my mind and as a believer of the most high God I wish to bring this to bare.

In the trailer for the Reign Album (Watch It), Shatta Wale was heard talking about how he came from nowhere, to be a Bandana and how he had a Bandana on, in a ‘Gringo’ hero and his reign which will be continued by a Majesty (his son) and a Reign which will last Forever and Ever.

It seems that was not enough, in the Album artwork, a Bible Quotation which is associated to the Reign of the ‘Lord’ which is Forever Ever has been refferred to, and Boldly Inscripted, Exodus 15:18 ‘The Lord Reigns Forever and Ever’ after Shatta Wales reigning ‘Crown’

Who is the ‘Lord’ In this case? And who is reigning Forever and Ever? Is the Reign Album about the Reign of the Most High God or Shatta Wale, who is a Mortal Being?

To Me I see no coordination between Shatta Wales Reign Artwork and the Citing of the Reigning of God and the Bible Quote.

Is Shatta Wale putting himself as a god?

We have been told in 2 Thessalonians 2:3 ‘The son of prediction, who oppose and exalt himself above all, that’s called God or that’s worshipped, so that he sits in the place of God, Showing himself that he is God’ Is Shatta Wale showing himself as Lord?

This Must Stop, the Name of the Lord can’t be used for Vanity, No man can ever live Forever and Ever and any such act must be Condemned. Daniel 8:25 ‘He Shall rise against the prince of Princes’

#This Is My Candid Opinion
Asaasewura Kwabena Santana Speaks!

SEE ALSO: Shatta Wale finally releases the Cover art for ‘Reign album’ and the songs to expect on the album