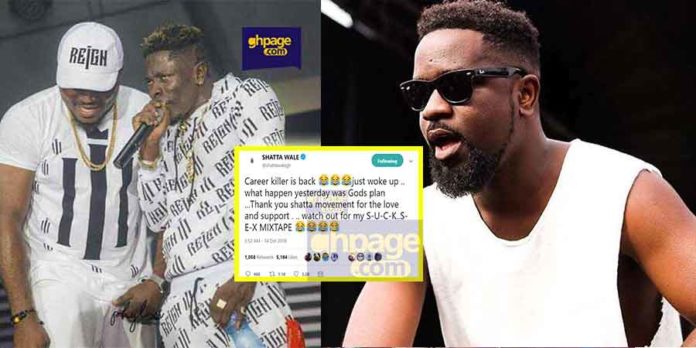 Ghanaian Sensational dancehall artiste Shatta Wale had a very successful ‘Reign Album’ launch at the fantasy dome yesterday in Accra—but the ‘beef’ between him and Sarkodie has seemingly not ended yet.

The ‘amount’ hitmaker took to his twitter handle to thank his fans for their support. He also added that they should watch out for a S-U-C-K..S-E-X MIXTAPE — which obviously, is an anticipated diss song for Sarkodie.

“Career killer is back just woke up .. what happen yesterday was Gods plan …Thank you shatta movement for the love and support . .. watch out for my S-U-C-K..S-E-X MIXTAPE” Shatta Wale wrote.

Moreover, Shatta Wale had a little reply for Sarkodie’s diss song targeted at him when he stated he only wears ‘alumni’ chains.

A line from the diss song alleged that the dancehall artiste wears aluminum (alumi) as chains.

A visibly pissed Shatta Wale announced that “I want some nice girl wey e dey here wey e bi Sarkodie fan, I wan give am my gold chain make e go check if I ever wear alumni before.”

He then went on to remove his shirt and after no one really came forward as Sarkodie’s fan, Shatta Wale declared that “e no get fan for here then e mean say Sarkodie be nobody.”

The self-acclaimed dancehall king had a sold-out concert yesterday, with many of his ever-loving fans filling the whole place.

Meanwhile, Shatta Michy also surprisingly showed up on stage to perform together with her once long-time fiancé.

Shatta Wale openly proposed to Shatta Michy on stage, before the couple later shared a passionate kiss which obviously excited the crowd.

Among the words used in the song, Sarkodie called Shatta Wale a fool who only makes noise and boasts when he has nothing.

He also “adviced” Shatta Wale to be wary of the things he does because his relevance in the music industry is fading soon.