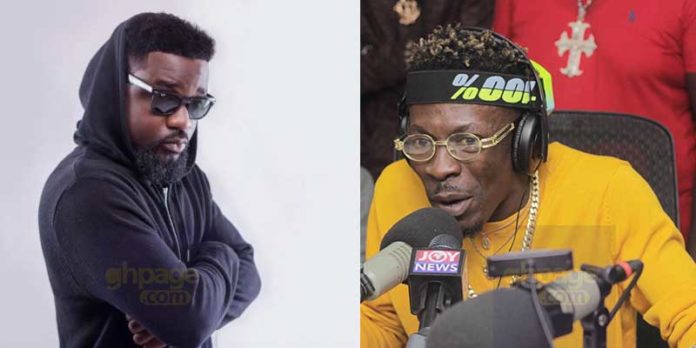 Ghanaian Dancehall artiste, Shatta Wale has finally revealed the real meaning of his name “Shatta” and “Wale” and where he got it from also throwing a jab at Sarkodie for renting cars.

Shatta Wale since his comeback in 2013 has become a force to reckon with. He has a mass following and calls them ‘Shatta Movement’

Shatta Wale in an interview with Joy FM, Friday 26, October revealed that he coined the name “Shatta” due to how serious he is in everything he does. Continuing, he revealed that the word ‘WALE’ is an acronym for “World Alert Lyrical Entertainer”.

Born Charles Nii Armah Mensah Jr. on October 17, 1984, Shatta Wale has risen through the ranks to become one of the country’s prolific artists in Ghana always entangled in controversies with his longtime friend, Sarkodie.

Sarkodie some few weeks ago released a diss song to his best friend Shatta Wale. The song title “advice” since its release got Ghanaians talking especially with the kind of punchlines and subliminal shots thrown at the “Gringo” hitmaker.

But in an interview with Daniel Dadzie on Joy FM’s Super Morning Show, the “Ayoo” hitmaker stressed that Sarkodie shouldn’t advise him since he’s got no car but rent cars for outings; thus Sarkodie can’t customise the cars he drives around town.

“…with the kind of message he sends across, the tweet, the way he relates to his fans, the kind of picture he wants people to see because Sarkodie is trying to tell people right now that, when you are an artist and you have a car you can’t even take a picture with it,” he said.

“… I wanted to let Sarkodie understand one thing that, you see me, I’m a very dirty guy, I don’t watch parents, I don’t watch anybody, that is how Shatta Wale is… I can go all out, that is why I showed him that Benz for him to know that if he says money no be problem, ebe en edey talk…”

“…he shouldn’t come and give me advice, I’ve advised myself, he should advise himself with a car too and let me see, that is how battles go like when you say you are strong, but you see up till now he’s not even bought a car…” he added.

“…I don’t brag, if I don’t have, I don’t have. But don’t come and tell me you are giving me advice when you can’t even afford your own car? you are driving somebody’s car? they bring cars for you and you drive and they sell it and you drive another one, always you don’t have a number plate…”  he fumed.