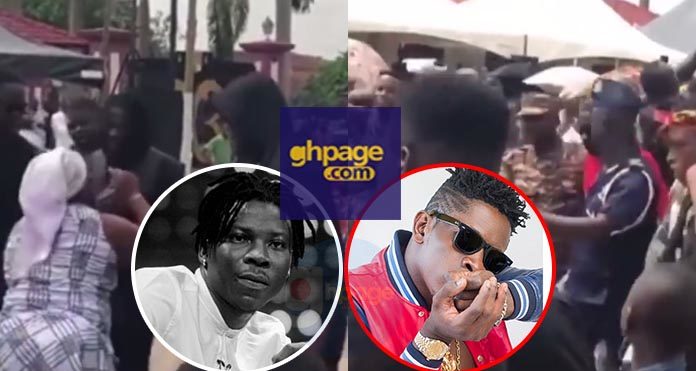 The battle of the Dancehall king continues as there’s always a hot debate as to who’s the biggest among the two[Shatta and Stonebwoy]in the country.

The whole Zylofon signed acts are currently in the Ashanti region to thrill the audience for the upcoming Akwasidae Festival but what happened at Manhyia in a way suggests that, when it comes to fame, influence and power, just maybe Shatta Wale has more of it than his rival Stonebwoy.

READ ALSO: Bill Asamoah’s wife is fine with my ‘relationship’ with him – Maame Serwaa

When Stonebwoy arrived at the Manhyia Palace, he had no special bodyguards around him, protecting him from the many people who wanted to hold and touch except for his own manager, Blakk Cedi and one personal bodyguard.

But when Shatta Wale arrived, we could see Firefighters, policemen, bodyguards (perhaps about 8 of them) guarding and protecting him from the crowd that wanted to get close to him.

READ MORE: S£x Scandal: Akosua Sika, The Slay Queen Who Was Beaten By Sharon Gh Lands In Trouble Again As A Video Of Her Being Chopped By Two Guys Leak