My love for Shatta Wale is irresistible- Man claims 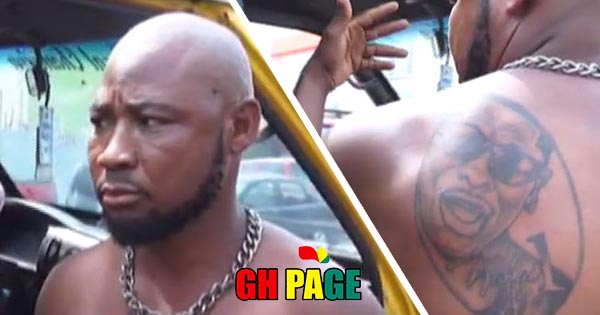 A commercial driver by name Liman Akpara who hails from Bolgatnaga in the Upper East Region of Ghana but plies on the stretch of Newtown to Acrra has declared much love and support for the Shatta Movement Boss.

The said driver has Shatta Wale’s pictures on his cars and a tattoo of the Dancehall artist on his back which he acquired for GHS 250.

Speaking to Joy News, Liman indicated that “it all started in 2013 when I saw the picture of Shatta Wale on my TV. At that instant, I fell deeply in love with him and made a lot of research on him, later to find out he was the then Bandana. I started downloading his tracks to play in my car. I got a TV and didn’t hesitate to download his videos to play in my car. I don’t listen to the news or anything on the radio, all I do is play Shatta Wale’s song and videos 24/7. Everyone who boards my car, the police and other commercial drivers knows am the biggest fan of Shatta Wale. Since I don’t listen to radio and not on social media, I buy newspapers related to Shatta Wale”

The man who has numerous tattoos on his body says he has not regretted having Shatta Wale’s tattoo on his body as compared to the others.

Read Also: Maame Serwaa Chronicles how she became an actress, Talks about life, and Relationship (Video)

He made a vow to carry passengers to and fro for free if he gets to meet his idol. He had a smock as a gift for the Dancehall King if he meets him. The man who sees Shatta Wale as a blessing from God believes nothing bad will ever happen to his idol no matter the bad news spread about him.