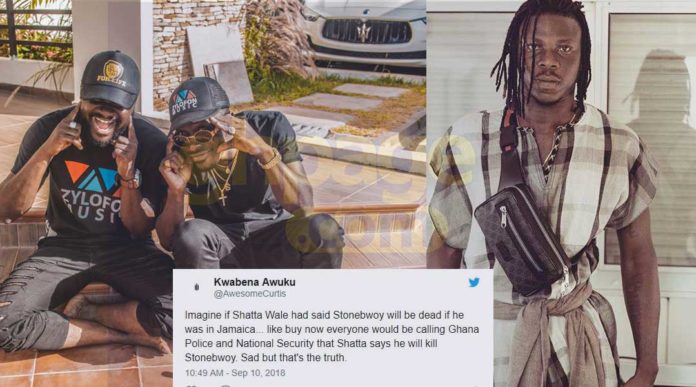 The official photographer for self-acclaimed Dancehall King Shatta Wale, Kwabena Awuku has added his voice to the ongoing beef between the SM boss and Bhim Nation boss Stonebwoy.

Stonebwoy over the weekend during an interview with King Lagazee passed some comment about Shatta Wale including saying, Shatta Wale, would have been dead by now if he was to be in Jamaica for running his mouth among other things.

Some Shatta Movement fans got angry after the Bhim Nation boss passed this comment including the manager of Hitz Fm who asked that Stonebwoy retracts his statement.

Awuku being the official photographer has also reacted to statement about his boss. Taking to his twitter page, he bashed Ghanaians for been hypocrites stating that they would have called on the Police to arrest Shatta Wale if he was to be the one who made this statement but since its Stonebwoy, everyone is acting cool.

Also Read: Samini begs on behalf of Stonebwoy’s for his outburst at Hitz Fm

He tweeted: “Imagine if Shatta Wale had said Stonebwoy will be dead if he was in Jamaica… like by now everyone would be calling Ghana Police and National Security that Shatta says he will kill Stonebwoy. Sad but that’s the truth…”

He also disclosed that Shatta Wale apologised to Stonebwoy during the UK edition of Ghana Meets Naija and even spoke to Stonebwoy’s dad over the phone to apologise for his “Suck your mother comments”.

He also tweeted: “Shatta Wale apologised to Stonebwoy @ the UK Ghana Meets Naija for saying “SUCK UR MODA” in a song. Stonebwoy called his dad and Shatta Apologised to him too. Only for them to reach Ghana and one person pretends it never happened and also change the story. Let’s be real for a min”.

See the screenshots below; 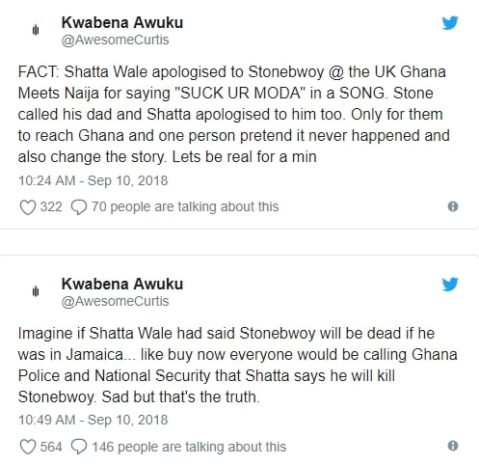