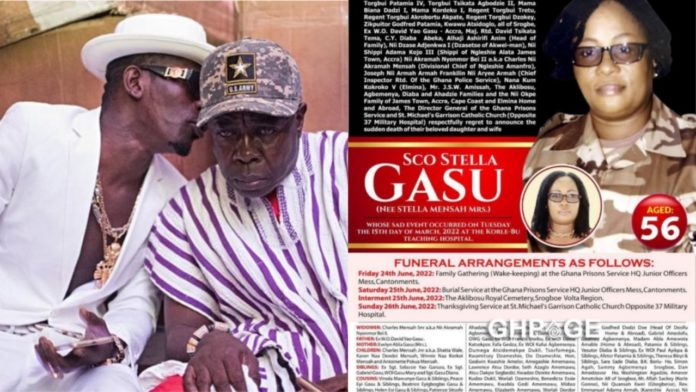 Ghanaian dancehall musician Shatta Wale lost his beloved stepmother to the cold hands of death a few months ago.

According to reports, the unfortunate incident is reported to have happened on Tuesday, March 15, 2022.

Shatta Wale’s stepmother who was married to his father Mr. Nii Armah Mensah reportedly passed away in their home at Korlegono.

Shatta Wale had a close relationship with his stepmother than his real mother as he spent most of his childhood in his father’s house.

According to royals of Amanfrom stool lands, they are disgusted by how Mr. Nii Armah Mensah parades himself as the Divisional Chief.

This followed after Mr Nii Armah Mensah senior described himself as the Amanfrom Divisonal Chief on the obituary poster of his late wife.

The spokesperson of the family has threatened to drag Mr Nii Armah Mensah Senior to court if he doesn’t stop addressing himself as the Amanfrom Divisional Chief because this is not the first time they have warned him.

Mr Charles Nii Armah Mensah Senior is yet to open up on these accusations and threats. Stay tuned for more…