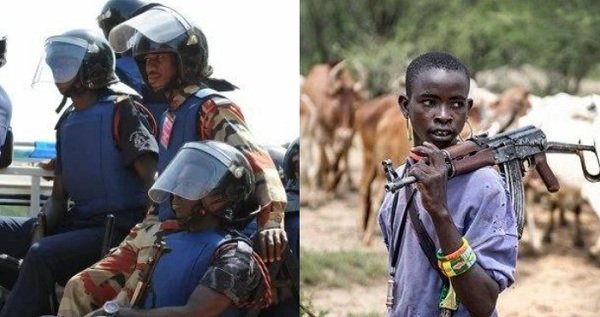 The police and joint task force team that has been deployed into Fulani-threaten areas in some parts of Ghana have been advised to protect themselves against any armed Fulani herdsman.

Reports emerging indicate that Superintendent Bossman Ohene-Boadi, the Konongo Divisional Police Commander has ordered his men to make their safety a priority therefore not to hesitate to engage the Fulani herdsman who posed any form of threat.

The Police Commander indicated that the task force was to shoot any Fulani herdsman who was holding arms so as not to get shot instead. He added that he believed in ‘safety first’ and would not want any of his men to ‘die in the bush’.

His comment followed the recent attack by Fulani herdsmen killing four security men around Agogo three soldiers and an officer in the line of duty.

Following the killing of security men, the government has deployed 200 joint security personnel taskforce to drive the nomads out of the lands they had occupied.

There were reports that the herdsmen had destroyed droves of farmland with their grazing cattle and had also damaged a lot of properties.

Some residents in the area, however, especially farmers whose lands had been affected were believed to have clashed with some of the herdsmen who are believed to be heavily armed.