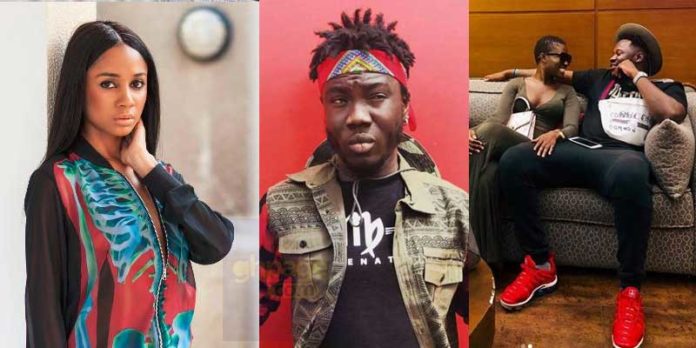 US-Based Ghanaian rapper and a former member of Criss Waddle’s AMG, Showboy has reacted once again to Sister Derby’s amorous relationship with rapper Medikal that has come to an abrupt end for obvious reasons.

According to Showboy in a self-recorded video, Sam Sarfo aka Showboy stated that all the three parties (Medikal, Sister Derby & Fella Makafui) failed to do the right thing but Sister Derby should be blamed the more.

In his assertion, Sister Derby should have advised herself from the beginning when music lovers and Ghanaians at large started judging their love status by comparing their age difference.

Showboy who has been criticizing Medikal for a long time since his departure from the label in his reaction shaded Sister Derby for agreeing to date someone she’s 8 years older than was a big mistake.

Advising further, Showboy urged Sister Derby to date her age mate or an older man who can respectfully take care of her because, for the toddlers, they will only play with her and dump her unexpected like how Medikal has done to her.

Read this: “I’m happy for my son” – Showboy reacts to Medikal pic with Fella Makafui

Showboy who was once a member of Criss Waddle’s AMG fell out with them after he started having issues with Medikal and has since been criticizing and calling him out whenever the rapper is in the news and even predicted that the relation between Medikal and Sister Debby won’t last.

Share
Facebook
Twitter
WhatsApp
Previous articlePhotos you missed from Hollywood star, Peter Mensah’s visit to Ghana
Next articleMedikal explains why he fell in love with Makafui after 5yrs of friendship

The future of two of Ghana's biggest artistes Shatta Wale and Stonebwoy in featuring in the Vodafone Ghana Music Awards (VGMA)...
Read more