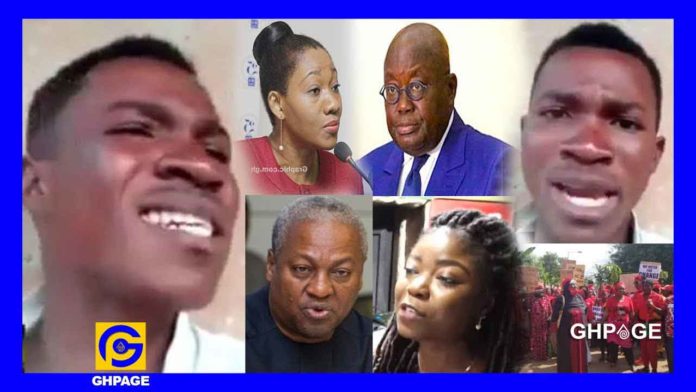 An SHS student has gone beyond his ‘limits’ as he has furiously insulted the President-elect of the Republic of Ghana, H.E Nana Addo-Dankwah Akufo-Addo, EC Chairperson, Madam Jean Mensa and some other media houses over the results of the elections.

Currently, the contentions between the two major political parties, NPP and NDC following the EC’s declaration on Wednesday 9th December 2020 has opened the portals for a series of protests to be staged.

This has also given some individuals the opportunity to say vulgar words against some leaders of the nation with the Akufo-Addo being the focal point of the conversation. These people believe he rigged the election in his favour.

In a new video, the unidentified young man for only God knows what triggered his fury has without mincing words heavily insulted the President. The words used can’t be repeated here.

According to him, Akufo-Addo is a thief. He used dubious means to win the 2020 elections.

On Jean Mensa, the layabout guy dissed her adding that she was connived with the ruling government to flaw the elections which according to him, God will punish her for that.

Attacking the media, with special mentions of Vim Lady, Captain Smart, UTV, Adom TV and JoyNews being his target he landed heavily on them calling them out to come and explain to him where they got their figures from.

He said a whole lot, take a look at the video below;