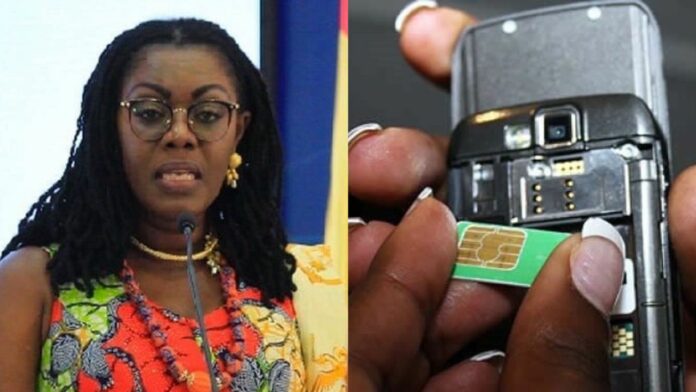 Some Ghanaians have taken to social media to cry and fume over the inability to make and receive calls.

According to them, it is unfair for their SIM cards to be blocked since they have not registered them yet.

Some of these complaints emeger from the fact that some of these individuals have not been able to secure the Ghana Card for the SIM registration.

Therefore, they beleive the telcos decision to block them from using their unregistered SIM cards to communicate is unfair.

Meanwhile, the Communications Ministewr, in a Facebook post has said all unregistrered SIM cards would be block intermittently.

According to her, that would be the final lap as the September ending deadline for the registration of SIM cards with Ghana would not be extended any further.

“I informed the media during my most recent meeting that the SIM registration exercise would not be extended past September 30.“

“After evaluation at the end of August, it has been determined that starting the disciplinary steps outlined in the NCA press release is prudent.“

“Additionally, any SIM that has not yet been completely registered will be unable to use voice and Internet services. Afterward, using unregistered SIMs will be more expensive.“

“At a subsequent press conference in September, the full scope of the sanctions will be revealed. If you suffer that fate as a result of your own inaction, kindly do not blame your service provider.“

“To be forewarned is to be forearmed.“

Below are some of the concerns by Ghanaians.

There are people who still haven’t received their Ghana card even though they’ve registered for it. As a result of this, they can’t register their SIM – and that’s no fault of theirs. How do you deal with that issue?

Madam Minister, you are completely out of touch with reality. How many sim subscribers have Ghana cards? This illegal and disrespectful interruption with People’s telecommunication is unconstitutional. You have refused to be accountable. Refused to tell Ghanaians how the contract for the award of the mobile app was arrived at, its cost to the tax payer, and u have refused to go to parliament for approval for the illegal collection of 5 cedis for the use of the app. I don’t blame u. I blame the docility of some Ghanaians, who should either be in the streets protesting and fighting for their rights to have interrupted communication or supporting boycotts. Your actions can’t happen in any civilized society

You people should be reasonable a bit , some of us have been chasing our Ghana card for about 4 years now and still not gotten it

Transportation alone to the NIA and other places we’ve been ask to go it’s not a joke , you can’t be running through and flow without a results, am sick and tired of this so called Ghana card

Ghana is for all of us so please put yourself into some of us our shoes and understand the situation, extend the time a bit for we the unfortunate, thanks