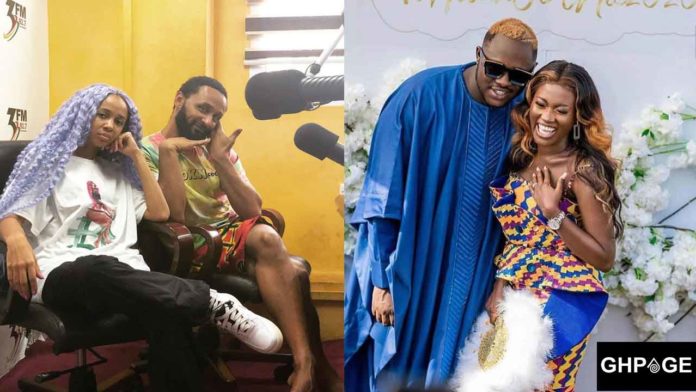 Ghanaian musician, Wanlov the Kubolor has revealed how his sister, Derby caught Fella Makafui having a sexual affair with Medikal.

The musician in an interview with Fiifi Pratt on Kingdom Plus disclosed that Fella Makafui played a significant role in the break up of Medikal and Sister Derby.

Wanlov revealed that his sister found out that Fella Makafui was having a sexual affair with Medikal which ended their relationship.

According to him, Sister Derby once met Fella Makafui driving out of Medikal’s compound when she went to visit him.

One time in their relationship, Sister Derby went over to visit Medikal and met Fella Makafui driving out of his house”, Wanlov disclosed.

Wanlov also averred that he was a great influence in Sister Derby recording all the songs she released after she broke up with Medikal.

He added that he helped Sister Derby in the production of all the songs and was the one who also advised her to post the ‘Sweet ex’ picture on Medikal’s birthday.

Medikal broke up with Sister Derby in 2018 after being in a relationship for three years and is now married to actress & entrepreneur, Fella Makafui.