The Expensive cars and powerful mansion of Sledge, the Shatta Wale fan who bought the Reign album for 1.5 Billion cedis will blow your mind [Video] 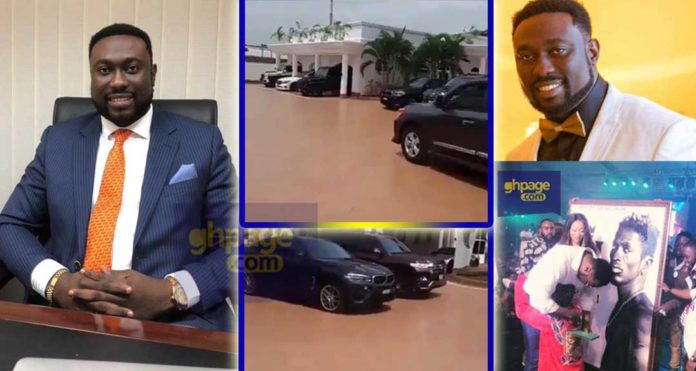 One person who has emerged famous after the launch of Shatta Wale’s Reign Album is one gentleman who goes by the name Sledge. Sledge is the die-hard Shatta Wale fan who bought the first copy of the Reign album for GH¢150,000 when it was being offered for sale at GH¢100,000

Ghpage.com discovered the identity of Mr. Sledge as Nana Yaw Duodu, a very successful businessman in Ghana who holds a degree in marketing from a reputable university in the UK.

SEE HERE: First copy of Reign Album was sold to a couple for GHC150,000

Sledge, Ghpage.com gathered is the president and chief executive officer of Goldridge Ghana Ltd, a gold dealership company. Currently, Sledge is in league with the Ministry of Lands and Natural Resources to develop innovative solutions for Small Scale Miners.

Well, a video showing the several luxurious cars packed inside a magnificent mansion has popped up online alleging to be the properties of Sledge and is fast going viral on all social media platforms.

Ever since Sledge bought the Reign Album for that whopping amount, people have been dying to peep into the life of Sledge and most people who have already sighted the video have had their minds blown away with the luxurious lifestyle of Sledge.

Packed inside the huge mansion is all types of luxurious cars one can imagine. However, Ghpage.com cannot confirm that indeed the cars and mansion is the properties of Sledge but we are making all effort to have a one on one sit down interview with him soon and we will keep you updated. Stay with Ghpage.com for more soon.

In the meantime, check out the video of the cars and mansion purporting to be that of Nana Yaw Duodu popularly known as Sledge below

SEE ALSO: Shatta refused to allow Samini and Stonebwoy to perform at his album launch

In a typical Ghanaian society, certain practices are frowned on. In view of this, western cultures are not liked and if...
Read more
Editor's Pick