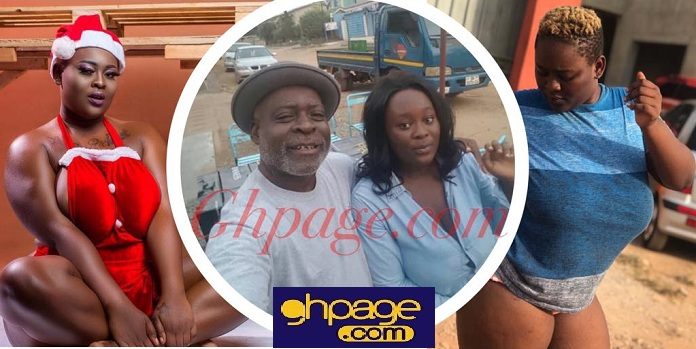 We reported earlier on a Snapchat lady who was warming the beds of Veteran actor Kofi Adjorlolo and his son.

Well, the Popular Instagram and Snapchat slay queen, Ama Richest has denied the rumors that she is sleeping with both the actor and his son at the same time. Amarichest took to her Instagram page to tell people who have been sharing such stories about her, what was on her mind.

According to her, it is a taboo and against her belief and virtue for a woman to sleep with a father and son and more importantly now that she is a changed person.

Ama Richest, who is a known escort charges her clients no less than $100 for her services, has been spotted a number of times with Adjorlolo and his son on separate occasions.

Some of the unconfirmed reports suggested that the veteran actor, Kofi Adjorlolo, has also been caught in compromising situations severally with Ama Richest.

Ama Richest didn’t take the allegations lightly put up a post on her Instagram page that would end everything. “Don’t get me wrong I have been bad before but for someone to come up and write fake stories about me sleeping with someone and his dad is just outrageous, I wouldn’t do that in a million years, just because am friend with someone and his dad doesn’t mean am warming their beds. Is not only a taboo to do that but it’s against everything I stand for’ I am a change person and am trying to better my life people should also try and do that and stop making up stories that’s ain’t true, thanks,” she wrote on Instagram.