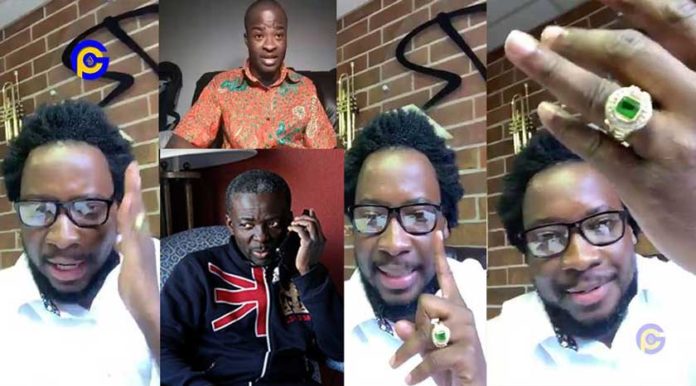 UK-based Ghanaian gospel musician and television presenter Sonnie Badu has reacted to allegations that he wears an occult ring.

According to the ‘Baba’ hitmaker, the ring he wears has no power in it and its a customised ring which he intends to pass it on to his son.

“You call this an occult ring. It’s emerald gold with diamond and Sonnie Badu written boldly on it. That’s what the black man made you think.

I spent a lot of money to get this and you’ve been made to think power can be put in a ring. That’s the problem African’s have, the level of the African mind they made you think God cannot help you so when they see you wearing a ring they say its occult and that’s what is helping you. No, God can help you.

I am too smart because if there is power in rings I will put it on my wedding ring that one you can’t talk about it.

Work hard, seek the face of God, believe in yourself and when you do that God will bless you. There is nothing in rings, it doesn’t work, stop coming on social media and making false accusations it’s not fair. You are sick in the head”, the gospel musician stated.

ALSO READ: The video Junior US posted that led to his death

ALSO READ: Yaw Dabo and baby mama issues was hype for a movie

The award-winning gospel musician got married to his wife Ann-Marie Davis in 2014 and have been blessed with two daughters and a son.