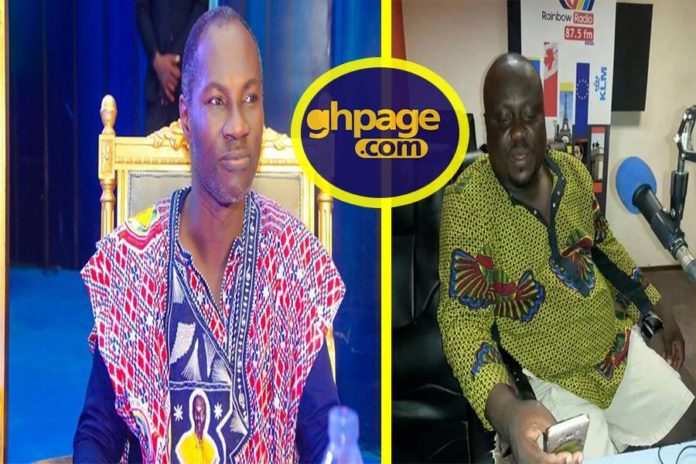 READ ALSO: Four people who have accused Kennedy Agyapong of being a drug dealer

And to make matters worse, Larbi, also known as DJ Oxzy, stated that he verbally attached him of being a fake prophet, a useless man and a drug dealer. ” I spent two weeks on my radio insulting and saying things that I have no knowledge about, just to make sure that the prophet of God will tell Appiah (one of his young pastors) to beg me; I know it has affected him and his church”, he confessed.

The owner of Oxzy FM, Alfred Kwame Larbi who also claimed Prophet Kobi obtains his prophecies from Rev. Owusu Bempah, he added, that that wasn’t the case but just to destroy the Prophet’s reputation.

“Prophet Kobi helped me when I lost my father; he gave me a car and even fueled it for me. I did not think twice before taking such useless decision to destroy him; I am very sorry”, he added. Prophet Kobi, when reached for his comments on the matter, simply said that he has left everything to God.

READ ALSO: ‘Angel’ Obinim Claims He Is No More An Angel But ‘Jesus Christ‘

Over the month’s, Dr Oxygen accused Badu Kobi for trying to tarnish the image of the President of the Republic of Ghana ‘Nana Addo’.

However, he stated that Prophet Kobi took him to his house at Sakumono, gave him picture’s of someone who resembled Nana Addo so he could use that as a tool to disgrace Nana Addo.

He also alleged that Prophet Badu Kobi’s prophecy about Nana Addo not able to become a president and Rev. Bempah’s prophecy about Mahama loosing the same elections in 2016, was the issue that brought about the ongoing bad blood between them.