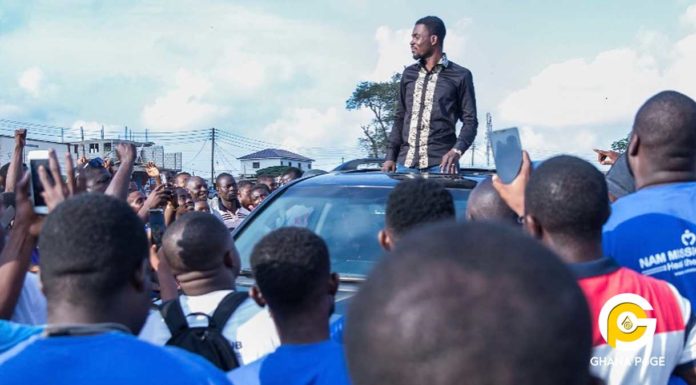 Renowned movie maker Leija Djansi, unlike other Ghanaians, is of the view that she is not sorry for embattled Menzgold CEO and businessman Nana Appiah Mensah aka NAM for all the problems he is currently going through.

According to her in a long post on Facebook, NAM 1 neglected all the people who helped him to become rich but rather concentrating on other people.

She continued and said NAM could have used his money in building hospitals and engaging in other charity projects that will help in the development agenda of the country, but he was rather engaged in flaunting his material wealth in the face of the people who made him what he was.

“I really do not feel bad for this Ghana Menzegold guy. People make a person rich. Every wealthy person has wealth because PEOPLE CHOSE to patronize their product.
When people make the choice to patronize your product and not your competitors, you honor them.

That is why Bill Gates has a foundation he uses to support the poor in the world. Apple, Walmart, Oprah, Ellen… They all support causes. They impact the ordinary man. That is how empowerment functions.

They don’t show off their private jets, multiple fancy cars. Taunt others with material things, or hang out with thugs and party recklessly. They do not flaunt, because they realize that, they have to HONOR the people who spent hard earned money for their service so they can be rich.

This guy was so loud: paying millions to rappers and actors we’ve never heard of in the name of signing. Who pays an actor to sign them? There was something completely strange about the operation.

Where are the hospitals and schools he built and embossed his name on? Like Akon, did he provide housing or electricity as charity? No, government cannot do everything. The West thrives because almost everything is privatized. Churches own a lot of hospitals out here. The government only regulates. Individuals and families own the food chains, supermarkets, studios”.

She added “In Ghana, most of these supermarkets, car dealerships and food chains are foreign owned. Fancy Ghana built by and owned by foreigners because citizens prefer to buy rolls royce and bentleys from foreign economies, drive it on bad roads to silverbird cinemas and watch foreign movies in a foreign owned theater. Then our government goes to those foreign countries to borrow money for our development. Ain’t that ridiculous?

The government owned hospitals are the worst. Even private ones are no better because they all shuffle staff…same ten and ten pence. The government officials know this so they quickly fly their ailments abroad and vacation abroad. Yet, we’re still pandering to government for everything!

Anywho. I hope he comes out of this unscathed, changed, eaten some humble pie and ready to serve the people who patronize his business. He could hide his wealth and project a front that says the journey to wealth is gradual and is a place of great responsibility.

Think twice about buying 5ghc credit or paying a monthly internet bill only to spend all day on the website of someone who drives a bentley and flaunts all their designer clothes and shoes in your face… it’s disrespectful”.