The wait is Over: Splitt finally dropped the "Over Star "Album it's a solid banger [Listen+Download] 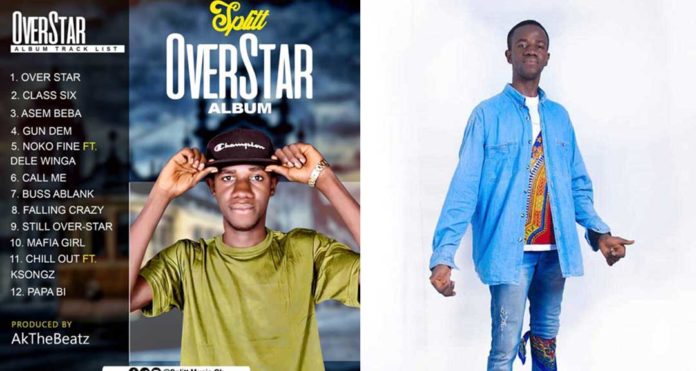 Fast-rising Ghanaian Dancehall, Reggae, and Afrobeat artist, Splitt has finally dropped the “Over Star” album as he promised his growing fans and it’s everything expected by many people who have come to love Splitt Music.

The “Over Star” Album has 12 dope Dancehall and afrobeat songs on it. It has songs such as “Over Star, Mafia Girl (The favorite of many so far), Class Six, Asem Biba, Chill Out ft KSongz, Noko Fine ft Dele Winga, Call Me” and many other bangers on the album.

All the 12 fire songs on the Over Star Album was produced by AkTheBeatz. The Album was released online yesterday, 10th December 2018 and it can be found on most music portals. The major launching will be at  Paddiez nightclub, Odorkor on 22nd December.

Listening to the Over Star Albums gives you the feeling you are listening to an A-list artist who is seasoned in the industry. The wordplay is on point so is the clear message carried in each song.

“Mafia Girl” for example talks about a girl who spent his money; gave him the impression of a chance of an affair and ended up dumping him after spending his money

No long talk, just check out the Star Album tracks below and give us your feedback. Trust me, you will be impressed.