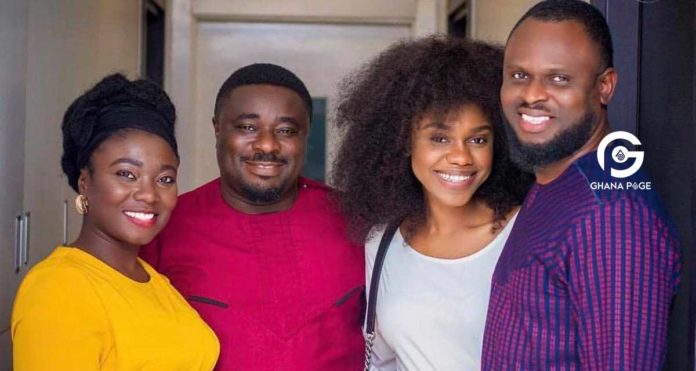 In a series of post on her Instagram handle, Stacy Amoateng stated that the best response for a fool is to totally ignore him or because the fool’s only aim is to drag you to his or her level.

SEE ALSO: Stacy Amoateng and her husband, Okyeame Quophi are the people causing confusions between Becca and her mother – Nana Yaa Achiaa

In this case, Nana Yaa Achiaa is the fool she won’t waste her time battling with. She added another proverb that she is not even her class for her to argue with in the first place.

Proverbs 26:4 Answer not a fool according to his folly lest thou also be like unto him. Proverbs 26:7 The legs of the lame are not equal, so is a parable in the mouth of a fool.

SEE ALSO: “You are a rapist”: Becca jabs all men who sleep with 15-year-old girls including her father [Video]

In another post, Stacy Amoateng educated her fans that when you realize an opponent has resulted to insults in selling their message, then you should know straight away that they are wrong.

Being a classy woman, Stacy Amoantg added that she might not control what people say or do about her, she will always control how she deals with by controlling her attitude.

Insults are the arguments employed by those who are in the wrong. You may not be able to control every situation and its outcome, but you can control your attitude and how you deal with it. Time tells it all. RESTORATION IS HERE

Few days after Becca and her mother’s problems took center stage in Ghana’ entertainment circle. A woman claiming to be very close to Becca’s family shockingly alleged Stacy Amoanteng is the one causing the problems.

She also alleged Stacy Amoateng is a pimp and she has been giving to women to big men in Ghana for a price. She claims Stacy takes 50% of all amount when she delivered ladies to rich men.