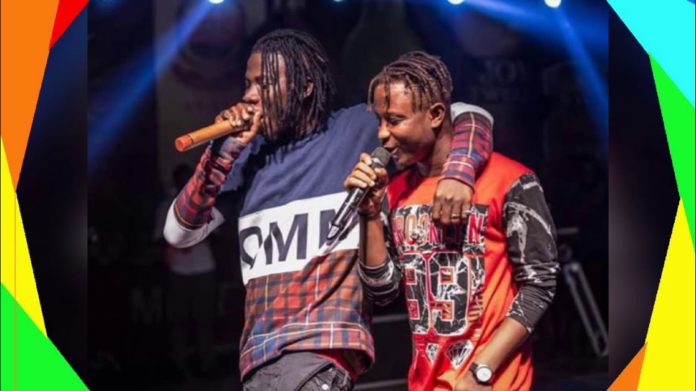 Kelvyn Boy in a leaked chat has told his former boss, Stonebwoy to be grateful to him and show appreciation because he backed him on stage for free even though it was not in the contract.

According to Kelvyn Boy in the chat, he does not know why Stonebwoy will call him ungrateful when he served him and did everything for him despite the fact that he looked down on him.

Kelvin Boy claims that he has paid his dues to Stonebwoy because he backed him on stage even though it was not their contract.

READ THE TEXT MESSAGE BELOW

Please don’t tarnish my image by saying I am UNGRATEFULNESS cos I’ve never been and will never be. It would be better to let me know exactly what I did wrong so I apologize than to paint me black.

U’ve always been a mentor and a brother to me and I thought I have been paying my dues by serving you (Barking) even though that is not in the contract. All that I did as a servant has been looking down on but am good.

SEE ALSO: Stonebwoy was never proud of me -Kelvyn Boy

The chat was leaked by Aisha Modie, the sister of Stonebwoy who angrily descended on Kelvyn Boy for disrespecting Stonebwoy.

Stonebwoy’s sister described Kelvyn Boy as a stupid boy who was imposed on the Bhim Nation camp. She vowed to deal with Kelvyn Boy if he ever attempts to disrespect Stonebwoy again.

Stonebwoy has terminated his contract with Kelvyn Boy. Prior to that, he confessed on Hitz FM that Kelvyn Boy has been ungrateful to him.