Ghpage.com earlier ran a story about GHOne’s news anchor and presenter, Serwaa Amihere, being crucified by social media users over a tweet which they have found rather unpopular. In the tweet, the news anchor enquired if sports betting was becoming a ‘national crisis’.

Her tweet was met with intensive backlash as social media users took turns to figuratively roast her online. It appears the heat hasn’t died down as it has been extended to her boss Bola Ray.

A Twitter user identified as @kaypoisson1 has slammed Bola Ray, CEO of EIB network parent company of GHOne TV where Serwaa is currently employed as an anchor.

The Twitter user who was ostensibly unpleased with Serwaa Amihere’s tweet replied the infamous tweet and suggested that Bola Ray consider betting in order to be able to win some money in order to settle the unpaid salaries of his employees. 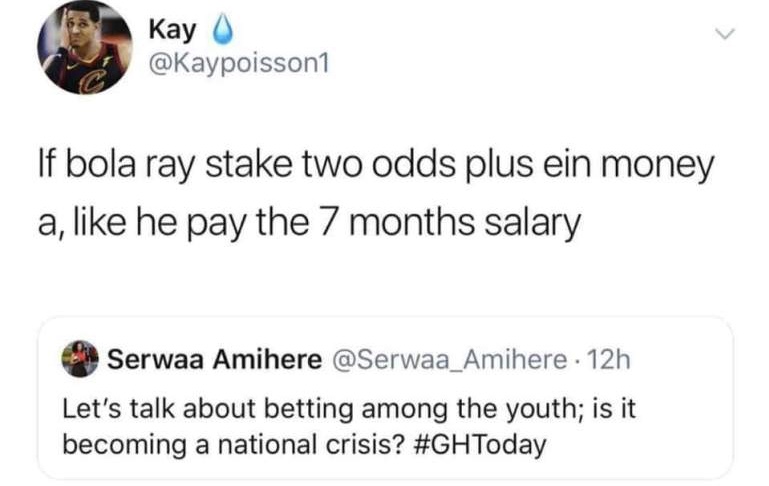 It is no news that the media company is financially troubled as Bola Ray himself recently admitted that the company owes several employees over 7 months salaries. This financial crisis has led to the mass exodus of some of the most talented producers, presenters and anchors from the media firm.

This is a huge jab and would definitely earn him a block from the Serwaa Amihere who happens to be a mentee of popular ‘Block Factory’ Nana Aba Anamoah.