A report by 3news.com indicates that the left arm of a five-year-old boy in the Central Region is fast decomposing after his stepmother allegedly cut the hand accidentally some weeks ago but left it untreated.

Currently, the left forearm of the boy, Isaac Mensah, has deteriorated due to decomposition which is fast spreading to the shoulder region.

Doctors at the Cape Coast Regional Hospital say his arm is no longer functional because the cells and veins are all dead.

Also Read: Lady confesses of marrying her step-dad after her mum divorced him

According to them, they will have to amputate the arm before it causes further damage through the infection.

Authorities at the hospital have thus asked the Abura/Asebu/Kwamankese District Director of the National Commission for Civic Education (NCCE) who took the child to the facility, to contact the boy’s parent to seek consent for the amputation. 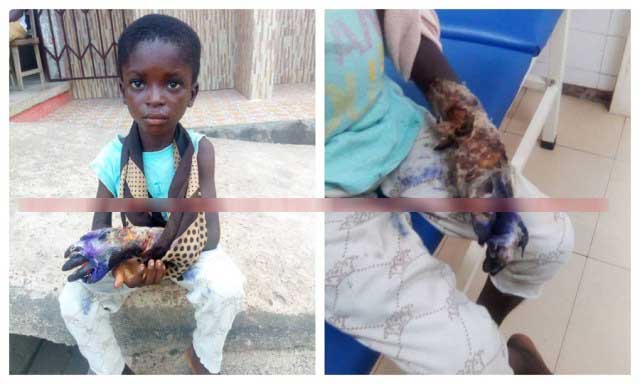 Two men spotted the boy in town at Ahomfi on Monday, January 28 and became alarmed by rotten hand.

Upon interrogation, the boy claimed he carried some cassava sticks to the farm for her stepmother with whom he stays, and while they were working on the farm, his stepmother accidentally cut his left hand but did not treat it for a week.

According to the boy, a week after the stepmother noticed his hand was swollen and the condition was deteriorating, she boiled water and dipped Mensah’s hand into it because he had out of pain, resisted the hand being massaged.

The two good Samaritans, who were shocked by the boy’s story, immediately reported the matter to the District Director of NCCE, Mrs Ellen Osei.

She also reported the case to the district police the same day together with one of the men, Haminu Mohammed.

They then proceeded to take the Mensah to the Cape Coast Regional Hospital for medical examination of the arm.

Mrs. Osei told our correspondent that the doctors at the facility after the examination resolved to amputate the affected arm to prevent further damage, but noted they have requested for consent from the parent.

According to her, the Police in the district are to take the father of the boy to the hospital to give surgeons the go-ahead to amputate the arm after which they will begin investigations into the incident for possible prosecution of the stepmother.