The baby daddy of Akuapem Poloo, Afoko, in the latest interview has dared her for a DNA test to prove his paternity. In the same interview, he declared his undying love and the fact that he is ready to marry her no matter what. 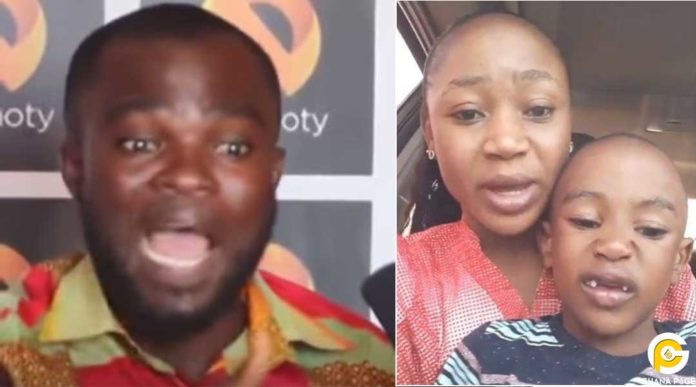 The baby daddy, Mr Afoko, of popular video vixen Akuapem Poloo is still talking after sending a strong caution to her a few days ago over their child.

Afoko in an interview with Entamoty Live claimed he loved and still loves Akuapem Poloo but her lifestyle isn’t allowing them to be together. He continued, Poloo used to stay with him at his home at East Legon.

“She moved in to stay with me when she got pregnant which I wanted to marry her but my family advised you couldn’t marry a woman who is pregnant and should wait till she puts to bed,” Afoko said.

He said he couldn’t marry her a few years ago because he wasn’t ready and because of that she angrily moved out of his house. And even after she left, communication wasn’t that effective which led to the deepening of their already turned sour relationship.

“But because she has pride in her, she got annoyed and was most of the time quarrelling with my mother. After several talks with her, she was not listening to my advice. After her childbirth, we decided to give three to four months before I perform the necessary marital rites but she couldn’t wait and decided to leave my house and said we should come for her if we are ready.” He continued.

He stated Poloo wasn’t picking his call at a point which made him lose touch with her and his kid.

A few ago, Afoko warned the controversial Akuapem Poloo to consider what people will say about their child if she keeps exposing her inappropriate photos and videos to the public.

“I am concerned about my son’s future. Akuapem Poloo, have you thought about the consequences of your actions on social media?

“Have you thought about the fact that people will make fun of our son in school over your behaviour on social media? You have been avoiding my calls and I want you to know that my family and I will be coming for my son,” he warned.

The vociferous Afoko at the time threatened to take the boy away from the socialite should she continue with her lifestyle.